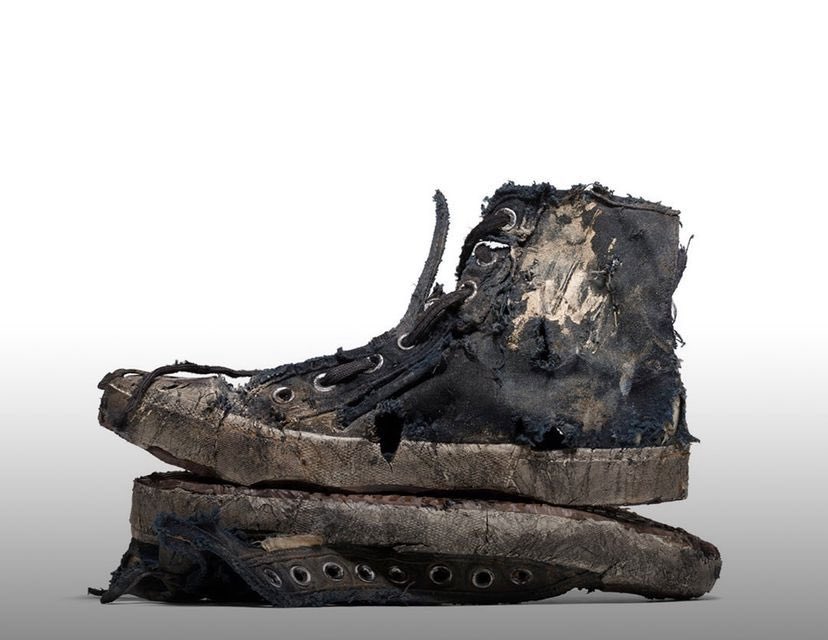 The silhouette limited-edition stock is available in three colours—red, white, and black—in the luxury brand’s high-top and mule iterations and is currently available for pre-order. With washed-out marks all over the midsole, the brand’s logo appears at the bottom of the kicks.

As explained in a press release, the Paris Sneaker is ‘meant to be worn for a lifetime. The extremely distressing shoes are set to be limited to 100 pairs in black and white. The new kicks are priced at a whopping range between $625 and $495 which is approximately around 50k to 1 lakh in Indian currency.

According to the brand, the new sneaker is “a retooled classic design which interprets mid-century athleticism and timeless casual wear in black, white, or red, with a white rubber sole and toe with distressed canvas and rough edges, affecting a pre-worn look.”

After the launch of Balenciaga Paris Sneaker, a barrage of netizens took to Twitter to associate their funny anecdotes with the bizarre fashion trend. A user said, “Perfect. My beat-up converse that went to 916146 festivals are back in style!,” another claimed, “Wow turns out I have Balenciaga shoes at home then.”

A section of the internet expressed their disappointment over the new limited-edition kicks. One said, “They are over-experimenting with the consumers how much they want these just to wear something from their label. But bro…. they look like they’re coming straight from the trash can.” Another couldn’t believe Balenciaga would come up with a ‘stupid’ experiment. The user explained, “Fashion is deadly, can’t believe how such an important name as Balenciaga is doing this stuff. Society is next to stupid nowadays.”

A netizen also called out the brand for defaming the millions who wear destroyed shoes because they can’t afford new ones. The user called the new kicks ‘Gross’ and added “A pathetic attempt to ride on sustainability/reduce/reuse with a product’s more than half of its life cycle eliminated already. A spit on the face of millions of people who wear their shoes destroyed because they can’t afford new ones, let alone Balenciaga ones, at 1450€ for the “extra destroyed limited edition” and 495€ for the slightly worn out second version. Gross.”

Continue Reading
You may also like...
Related Topics:Balenciaga, Featured