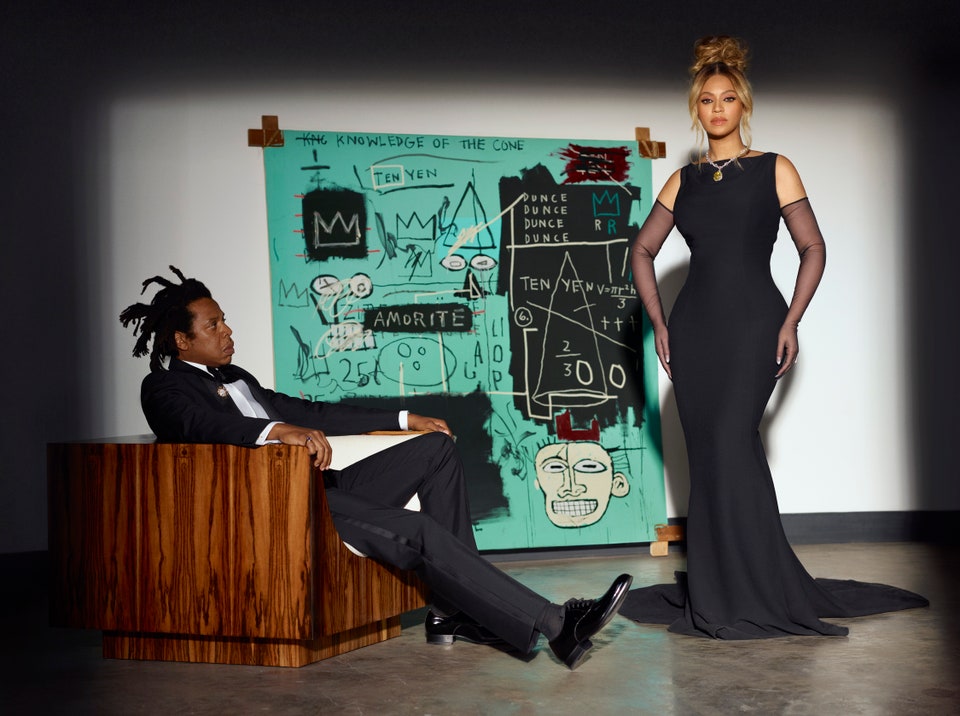 Of course, the priceless Fancy Yellow diamond on a long chain adorned with over 100 carats of diamonds itself looks right at home around Beyoncé’s neck as she posed for Tiffany’s new About Love campaign, shot by Mason Poole and styled by June Ambrose and Marni Senofonte, and the accompanying video, shot by Black Is King director Emmanuel Adjei. Her hair, styled by Jawara Wauchope and Nakia Rachon, is piled on top of her head in a glamorously unkempt updo and her makeup is subtle save for a dramatic cat eye (perhaps another nod to Ms. Hepburn’s Holly Golightly). The priceless necklace matches her 22-carat cushion-cut yellow diamond ring, two of many diamond-heavy pieces she wears throughout the campaign.

Jay-Z, in a neat black tux that complements Beyoncé’s curve-skimming, black cutout-dress, has his own fair share of jewels. A Bird on a Rock brooch by Jean Schlumberger, one of the most renowned jewelers of the 20th century who was once vice president of Tiffany & Co, was refashioned into a one-of-a-kind pair of cufflinks for the rapper. He also wears a striking Apollo brooch in platinum, yellow gold, and diamonds, as well as a slew of other Tiffany pieces including one of their new engagement rings for men.

“Beyoncé and JAY-Z are the epitome of the modern love story,” Alexandre Arnault, Executive Vice President of Product & Communications said in a release. “As a brand that has always stood for love, strength and self-expression, we could not think of a more iconic couple that better represents Tiffany’s values. We are honored to have the Carters as a part of the Tiffany family.” Given it’s the first time the couple have starred in a campaign together, you’d have a hard time imagining what could create more buzz. Which is exactly the point. The campaign ushers in a new era at Tiffany’s, the campaign is the result of close collaboration and a shared vision between both the Carters and Tiffany & Co. Continuing that partnership, Tiffany will also donate $2 million towards Historically Black Colleges and Universities.

But while the star power will undoubtedly bring in the couples’ fanbase, there are some Easter eggs for Tiffany fans as well. The film pays homage to Breakfast at Tiffany’s with a new version of the song “Moon River,” sung by Beyoncé and captured on Super 8 film by Jay-Z. For art fans, the Carter’s pose in front of Jean-Michel Basquiat’s Equals Pi painting, which is rendered in Tiffany Blue (part of a private collection, the piece has never been on public display before). The film will be released on Tiffany’s website on September 15. We can’t wait to hear Beyoncé’s take on the iconic song. Until then, these images will be burned in our memory—not least because of the blinding diamonds.

Continue Reading
You may also like...
Related Topics:Beyonce, Featured, Tiffany