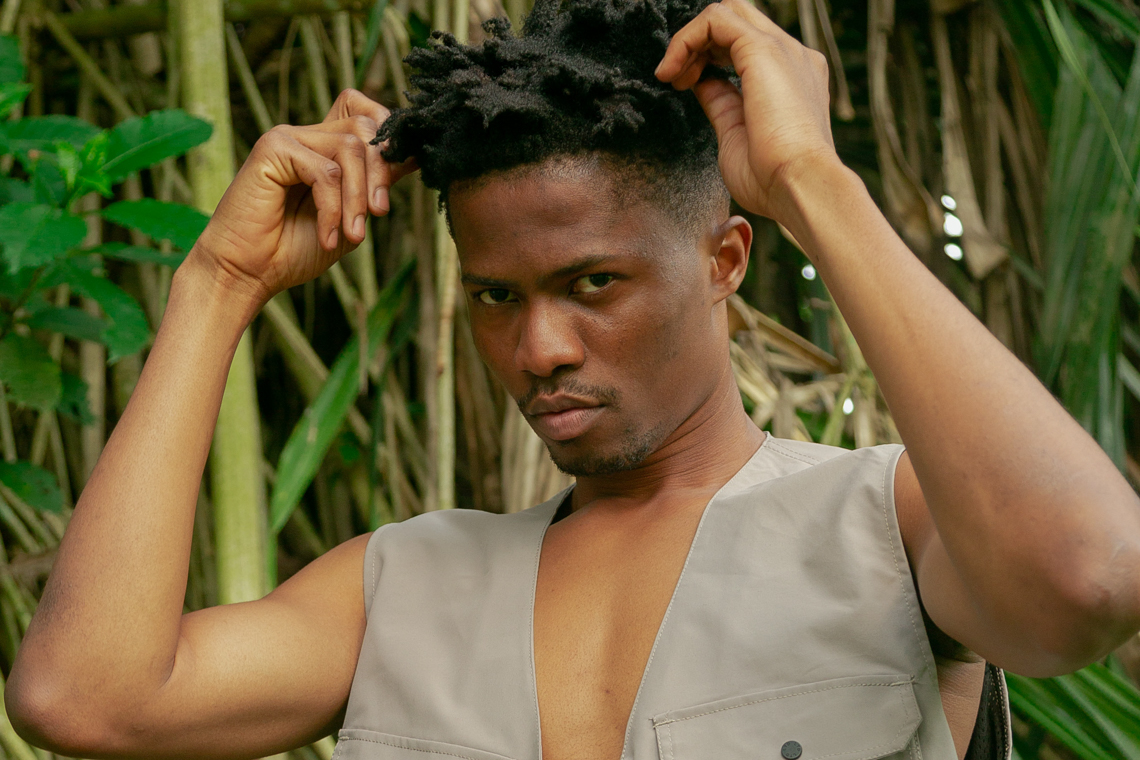 2017 saw Kwesi Arthur’s breakthrough with “Grind Day”, in which the remix featured the iconic Ghanaian rap titans Sarkodie and Medikal. Since then, Kwesi Arthur’s career has been on an upwards trajectory. Blending hip-hop and rap, with infectious afropop and afrobeat melodies, Kwesi Arthur has taken this unique fusion of sounds to the world.

Though he has released an array of EP’s in the form of Live From Nkrumah Krom (2017) and Live From Nkrumah Krom Vol II: Home Run (2019) and short tapes in the This Is Not The Tape, Sorry 4 The Wait series, Kwesi Arthur feels now that this is the time for the album. Entitled Son of Jacob, Kwesi Arthur explores identity, family and friends and all things life on various soundscapes. Take in our deep dive with Kwesi as we discuss the album, and everything else around it.

Before we get into the album, you said “2022 – Ashawo Season”. Is there a deeper meaning to it or is it just a phrase you’ve been using?

“Yeah bro. Well “Ashawo Season” isn’t what people think it is. It’s just about being everywhere and pushing your craft to the max, dnd pushing yourself to be everywhere.”

Where you titled it the project Son Of Jacob, I thought there could be two reasons for this – maybe you’re taking a more biblical route with the album, or you feel you are the 13th Son of Jacob (as there 12 sons). What’s the concept behind this?

“With how my name my projects, the names just come to me. For example, Live From Nkrumah Krom came to me around 2010. That’s kinda the same thing with Son of Jacob, it just came to me. Chale, I don’t want to go into much more detail because I’d like people to experience the project for themselves and make their own interpretations for it, but yeah”.

“Drama” is the opener on Son of Jacob. Seems like you aren’t taking nonsense this time around as you say “aint none of you niggas want know drama”. What influenced the content of the song and why this particular instrumental?

“(laughing) Bro, boys dey talk you barb? Boys dey talk! That was basically the inspiration for “Drama”. Usually people are chatting behind your back, but then if you see them in person then they move some way. That’s where “Drama” is from.

“It was produced Juiczx, shoutout Juiczx. Bro that’s one of the hardest producers in Africa, in the world! He sent me a pack of beats, and I was in America when I recorded that song. We went to New York for a show and the song was recorded in a hotel room. BigHomieFlee and Nana Sho was there too.”

“That’s big bro man. More time he shows us the ropes and guides us, and I appreciate him for that. And every time he talks on records, its usually very profound, you barb? He speaks for us as well because what he talks about resonates with people who are from where we are from too.”

You’re asking God when you’ll be counting the “Paper”. Produced by Team Salut, one of the biggest producers in the UK Afroswing fraternity and generally in African music. How did you guys link up?

“That link up came around 2018..2019? They had Mr Cocoyam in the studio too, proper funny guy. So we made that song in that session. I’m asking God when I will be getting the paper because coming from where we are coming from, most times you’re thinking about how to get your family out of… like out of our situation because it’s not easy here. And chale, to bless my enemies so that nobody will envy me.

“Another thing with this song, is that I was in a place where I was working so hard but not really seeing results. So it’s only right that now it’s come out, it’s the best time for the song.”

Now despite you being a rapper, you are also very melodic and have a good singing voice. Being Ghanaian, is it the highlife influence or do you personally like singing?

“Musically, I’ve been influenced by many genres, including hip-hop, highlife, Nigerian music. My favourite highlife musician is Daasebre (all-time), but currently Bisa Kdei is.”

I guess the message in “Disturb” is to be carefree and not think about what others think of you. Is that something you’ve had to learn/overcome and can you give an example of this?

“Well, I kind of used to care. Even now, there are certain things you’d definitely care about even though you say you don’t. Me saying “time no dey”, we get limited time. So whatever you want to do, just go out there and do it. Disturb plus your positive actions. On this song I had my blood cousin on the outro. We started making music together in Ghana. He’s part of the reason why I do this – him and my older brother starting rapping way before I did, so I pay homage to them.”

“Silverspoon” is a introspective, deep track. You talk about the loss of your Grandma. Obviously a silver spoon refers to getting things easy in life – how hard has it been for you to get to where you are now, and what would you be doing if you weren’t doing music?

“(sighs) In terms of what I’d be doing if music didn’t work out for me, bro I don’t try to think about it. I don’t like to think about it. I feel like music saved me. “Silverspoon” comes from a real emotional place because my grandma was the head of our family. She held everything together. Fortunately or unfortunately for us (looking back I feel fortunate for these experiences), we didn’t have certain luxuries you barb? Even shelter was a problem.

“But my grandma being the head of the family, made sure we were protected and we were always good. So when we lost her, I feel like so many things came crashing down for me. So yeah, “Silverspoon” comes from a real emotional place.”

“BMX bike nso me twe no ti se benz” ( translation from Twi: BMX bike but I’m riding it like a Benz). Material things don’t really matter to you – how have you been able to filter this out of your music?

“Yoo … “BMX bike nso twe no ti se benz”. We just learnt to appreciate what we had from a young age, you barb? We didn’t really have much. At some point having food to eat was even a problem. So we’re just grateful for how far we’ve come.

“We fight for our needs where we’re from, not necessarily our wants. I was telling my friend the other day that I only started caring about clothes like last year. More time we’re looking for what to eat – what type of clothes we have is secondary!”

“Winning” is a huge anthem. It was one of the 3 pre-released tracks (“Baajo” ft Joeboy and “Celebrate”ft Teni). How did you guys come together and why did you go for this sound?

“With “Winning”, Vic Mensa was somebody I have been following for a long while. I remember I remixed one of his songs in my early stages. (laughing) I don’t even wanna hear that song right now! So when he came to Ghana, we reached out and he was on the same vibe. Fortunately for me, he was also listening to my vibe, so it was pretty easy for us to lock in. We booked an apartment, and made “Winning”. I had the hook and one verse already for “Winning” before I met him. But I kept the hook and changed the verse.

“Celebrate” wasn’t even planned! We were mixing songs for the album with MOG. After the session, he played some beats, and played the beat for “Celebrate”. I then wrote the song with my brother, DayOnTheTrack.

“With Joeboy, that’s like family. Everytime we link up its good vibes and pure energy. I like doing music with him.”

“Freaky” with M Huncho – me personally that’s the most different I’ve heard you rap on. What do you think of the trap wave sound in the UK, and have you guys met ?

“It’s hard bro, I really like it. You got Nafe Smallz and D-Block Europe as well. M Huncho be super hard. I changed the song name too from “Freaky” to “Jungle Music Part 2”. Juiczx also produced this one. We actually haven’t met up in real life, but I met his manager in Ghana in 2020. I just sent him a message on Instagram and it was magic from there.”

Would we be hearing you more on this sound? Which other UK artists in future would you like to collaborate with?

“Bro, I want to man. I’m open to working with people in the UK. I like the vibes out there in the UK.”

Another big UK collaboration was with NSG (“Diamonds Dancing”). Arguably the biggest afro collective in the UK, what do you make of diasporans reconnecting with their roots (eg through events such as Year of Return)?

“It’s amazing man. Like a couple of years ago it wasn’t really “cool” to say you were African. But now people are embracing their roots so it’s great to see. NSG be one of the biggest groups in the world in my eyes. And they’re really talented, super hard guys. We made the song back in 2018. I’m currently working with Dennis (Kruddz) on something. We linked up in January in Ghana.”

“Mind over body” and “Animal” both have an Amapiano feel. Arguably one of the biggest sounds last year, do you think it is here to stay or is it just a moment?

“The feel of Amapiano will be around forever. Maybe the drums or certain aspects may change, but the feeling is forever. It’s one of the hardest genres right. We call it “asopiano” – a combination of asokpor music which is dance music in Ghana, and Amapiano. Both songs featured DayOnTheTrack.”

“Adom” (Grace) – a typical highlife/Ghana gospel song to close the project. I personally loved it, type of song to start your day – why wasn’t it longer?

“Well with it not being longer chale, that’s the appropriate length of time we thought was good. The duration of the track did it justice of what we wanted to put out there. But with me making “Adom”, my mother and grandmother always used to advise me to do Gospel. My grandma was heavily involved in the church. I made the song “Woara” for them. At one point I was with my mum and she told me that I had to make another Gospel song for them, so I made “Adom”. “Adom” came to me. Fortunately my grandma heard it before she passed away. Shoutout TwoBars for the beat.”

Do you go to church often?

“My uncle is a pastor. I grew up kind of working in the church, because every Wednesday and Sunday we’d have to go in and clean and arrange the chairs, pick up the mics and sing. Sometimes, if the instrumentalists weren’t in we’d go in and play, we didn’t know how to play well but we’d try. So I’ve basically grown up in church and so I’ve seen the patterns.”

Your last words – what does Son of Jacob mean to you?

Be sure to check out our definitive list of some of the hardest Ghanaian Drill artists coming out the country right now. Check that out here, and keep it locked on GRM Daily for any more developments Kwesi Arthur related and more!

Continue Reading
You may also like...
Related Topics:Featured, Kwesi Arthur

Charles Sagoe Jr: Meet the Ghanaian teenager changing the game in football
DBJ receives an honouree at Ghana’s 25 Under 25 awards