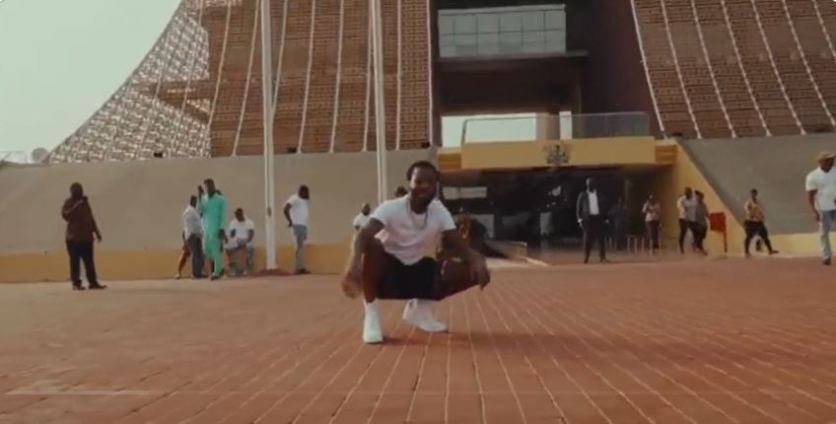 In a tweet on Monday evening, the singer said it was not his intention to disrespect Ghanaians.

Reacting to the barrage of insults and criticisms that have greeted the said video, Mill said contrary to the perceptions in the public, his aim was simply to project ‘art’.

He said his motivation for shooting the said video was to help project Ghana and further strengthen the bond between Africans across the globe.

Expresing his apology to Ghanaians and the Presidency, he said he is not familiar with the sensitivities of Ghanaians, adding that he meant no harm whatsoever.

“To the people of Ghana, no video I drop is ever meant to disrespect the people of Ghana …. The fastest way to make a connection is thru music and I wanted to do that with displaying art … I’m in my 30’s from America and didn’t know much about the lifestyle here”, he tweeted.

The artiste continued, “My apologies to the people if any disrespect! We still gonna push to make the connection between black people in America and Africa … what I’m trying to do is more than a video and you should see coming soon! My apologies to the office also!”.

On Sunday evening, American act, Meek Mill, posted a music video he shot at the Jubilee House, during his visit to the country during the Christmas festivities.

The singer and his colleagues walked through some chambers of the Jubilee House, as well as the outer precincts of the facility.

Mill also made use of the official podium Akufo-Addo uses in his public addresses; while dishing out portions of his rap lines.

What he intended to excite his fans rather angered hundreds of Ghanaians who took to their social media platforms to condemn the use of the Jubilee House for the said filming.

According to the critics, since the Jubilee House is the embodiment of Ghana’s executive authority, it is inappropriate for the singer to have been allowed to access it in that manner.

The critics have therefore lambasted the Presidency for allowing the Jubilee House to ‘cheapened’.

Meanwhile, Meek Mill himself has deleted the video from his Instagram page in the wake of the raging public backslash.

A check by JoyNews revealed that the video which was earlier uploaded by the rapper on Sunday evening on his Instagram page has been pulled down.

Continue Reading
You may also like...
Related Topics:Featured, meek mill