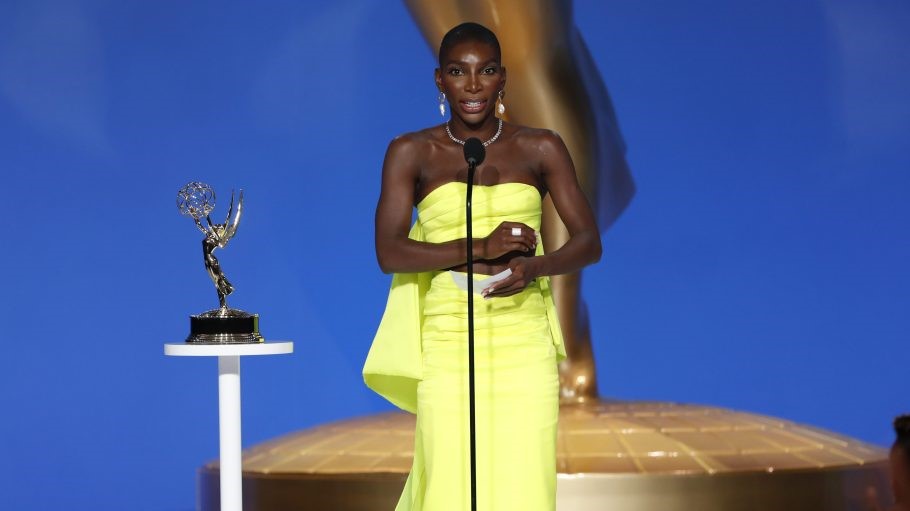 Coel became the first Black woman to win an Emmy Award for Best Writing in a Television Limited Series or Movie.

Michaela Coel from ‘I May Destroy You’ appears at the 73rd Emmy Awards, broadcast on Sept. 19, 2021. Cliff Lipson/CBS via Getty Images

Michaela Cole made history at the 2021 Emmy Awards on Sunday evening (Sept. 19), becoming the first Black woman to win an Emmy Award for Best Writing in a Television Limited Series or Movie for her work on I May Destroy You, a drama about a talented writer coping with the trauma of surviving sexual assault.

The series, which the multi-hyphenate also created, co-directed, and starred in, beat out Mare of Eastown, The Queen’s Gambit, and three episodes of WandaVision for the award, giving Coel her first Emmy of her career.

Delivering an acceptance speech that was succinct and geared towards fellow writers, the British-Ghanaian actress, screenwriter, director, producer, and singer spoke words of inspiration to her peers, encouraging them to stray outside of their creative boundaries, and to avoid the rat race for relevancy.

“Write the tale that scares you, that makes you feel uncertain, that isn’t comfortable,” Coel told the audience and those tuning in. “I dare you, in a world that entices us to browse through the lives of others to help us better determine how we feel about ourselves. And, to, in turn, feel the need to constantly be visible, for visibility these days seems to somehow equate to success. Do not be afraid to disappear, from it, from us for a while, and see what comes to you in the silence.”

Ending her speech by dedicating her award and I May Destroy You‘s story to “every single survivor of sexual assault,” Coel’s time on stage was relatively short, but proved to be among the most impactful moments of the night.

The Real Housewives of Lagos is set to debut early 2022 as a Showmax Original
Kevin Hart and F. Gary Gray Team Up On Netflix Heist Film ‘LIFT’