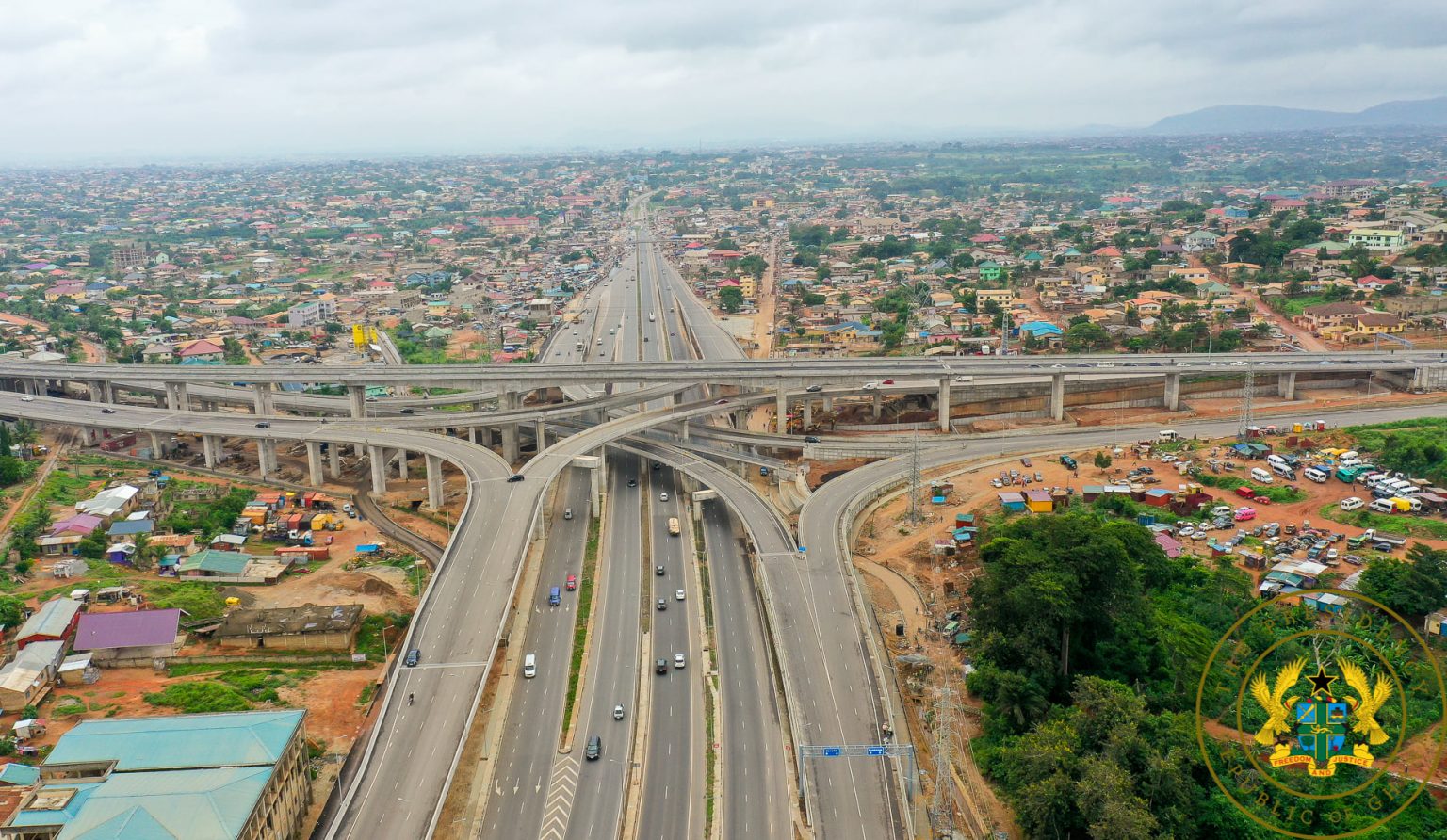 According to President Akufo-Addo, the completion of the interchange, which will help solve, once and for all, the nightmare endured for several decades by commuters within and outside of this vicinity, was completed in thirty-six (36) months, albeit in the midst of COVID-19.

The Pokuase Interchange Project involved the construction of the 6.5-kilometre Awoshie to Pokuase road; an interchange at the intersection of ACP junction to Awoshie to Nsawam road; two (2) footbridges; the widening of the Nsawam road by some two (2) kilometres; drainage works; the provision of streetlights; and the construction of twelve (12) kilometres of town roads.

It also involved the rehabilitation of the Kpobiman Women’s Group Centre to train women in pastry, bread, soap and bead making; the rehabilitation of the Manchie Gari Factory for the processing of cassava into gari and starch; the protection of the three (3)-hectare Gua Sacred Forest; and the provision of ICT labs for fourteen (14) basic schools, which will help train some ten thousand (10,000) basic school children within the Ga North, South, Central and West Municipalities, with knowledge in information and communications technology.

Addressing the gathering, the President indicated that the original contract design was for a three-tier interchange, however, through efficient management by his government, the Interchange was modified to a four-tier structure within the same contract sum.

“Indeed, two hundred and eighty-nine million United States dollars (US$289 million) has been used by the Akufo-Addo Government to construct three (3) interchanges, that is at Pokuase, Obetsebi-Lamptey and Tamale, as opposed to two hundred and sixty million dollars (US$260 million) being used, by the Mahama government, to construct just the Kwame Nkrumah Interchange. These are further examples of the fact that we, in the New Patriotic Party, are good protectors of the public purse,” he said.

President Akufo-Addo stated that the Pokuase Interchange is an integral part of comprehensive measures put in place by Government to address the issues of congestion in urban centres, and to help improve travel times on major arterial roads.

To this end, he told the gathering, which included the President of the African Development Bank, Dr. Akinwumi Adesina, that Government has begun the construction of Phase II of Obetsebi Lamptey Interchange, the Tamale Interchange, the PTC Roundabout Interchange in Takoradi, the Nungua Interchange which is part of the La Beach Road Completion Project, the Adjringanor Overpass, where ongoing works will be completed by the first quarter of 2022; and Phase II of the Tema Motorway Interchange.

In addition to the construction of interchanges, the President noted that Government has embarked on a number of projects to improve urban mobility in the country to help reduce travel times on our roads.

“These include the construction of some one thousand, two hundred (1,200) kilometres of asphalt overlay throughout the country in my first term. Beneficiary cities include Accra, Kumasi, Tema, Cape Coast, Sekondi-Takoradi and Hohoe. In Accra, some of the areas that have benefitted include Weija-Gbawe, Dansoman, Abossey Okai, Osu, Adentan, Bubuashie, Sakumono and Mempeasem,” he said.

The President continued, “The Tema Steelworks Road, the only concrete road to be constructed by Government since the Accra-Tema Motorway, has also been completed. Similar works are also being undertaken within the Tema Industrial enclave”.

Additionally, he stated that the Legon/Adjringanor roads, aimed at improving travel times within that corridor, are fifty-two percent (52%) complete; the Kumasi Roads and Drainage Extension Project, which includes the dualization of the Lake Road and lining of the Sissai River Drain in Kumasi, is seventy-five percent (75%) complete; and the Teshie Link Road, popularly referred to as the LEKMA Road, is ninety percent (90%) complete.

“Rehabilitation work on the Assin Fosu to Assin Praso highway is currently ongoing, with that of the Agona Junction to Tarkwa highway beginning shortly, as the contractor is mobilizing to go to site. Construction of the dualization of the Sekondi/Adiembra roads, in Sekondi-Takoradi in the Western Region, will begin next month in August,” President Akufo-Addo said.

Having declared 2021 as the “Second Year of Roads”, the President informed Ghanaians that the Ministry of Roads and Highways has programmed to undertake the construction of one thousand, five hundred (1,500) kilometres of asphalt overlay in all parts of the country.

“I appeal to the users of the facility, especially drivers, to adhere to the various road safety measures put in place for the safe use of the facility. The modernisation of Ghana is steadily gathering momentum, and I entreat all Ghanaians to join hands in building the Ghana we want,” President Akufo-Addo said in conclusion.