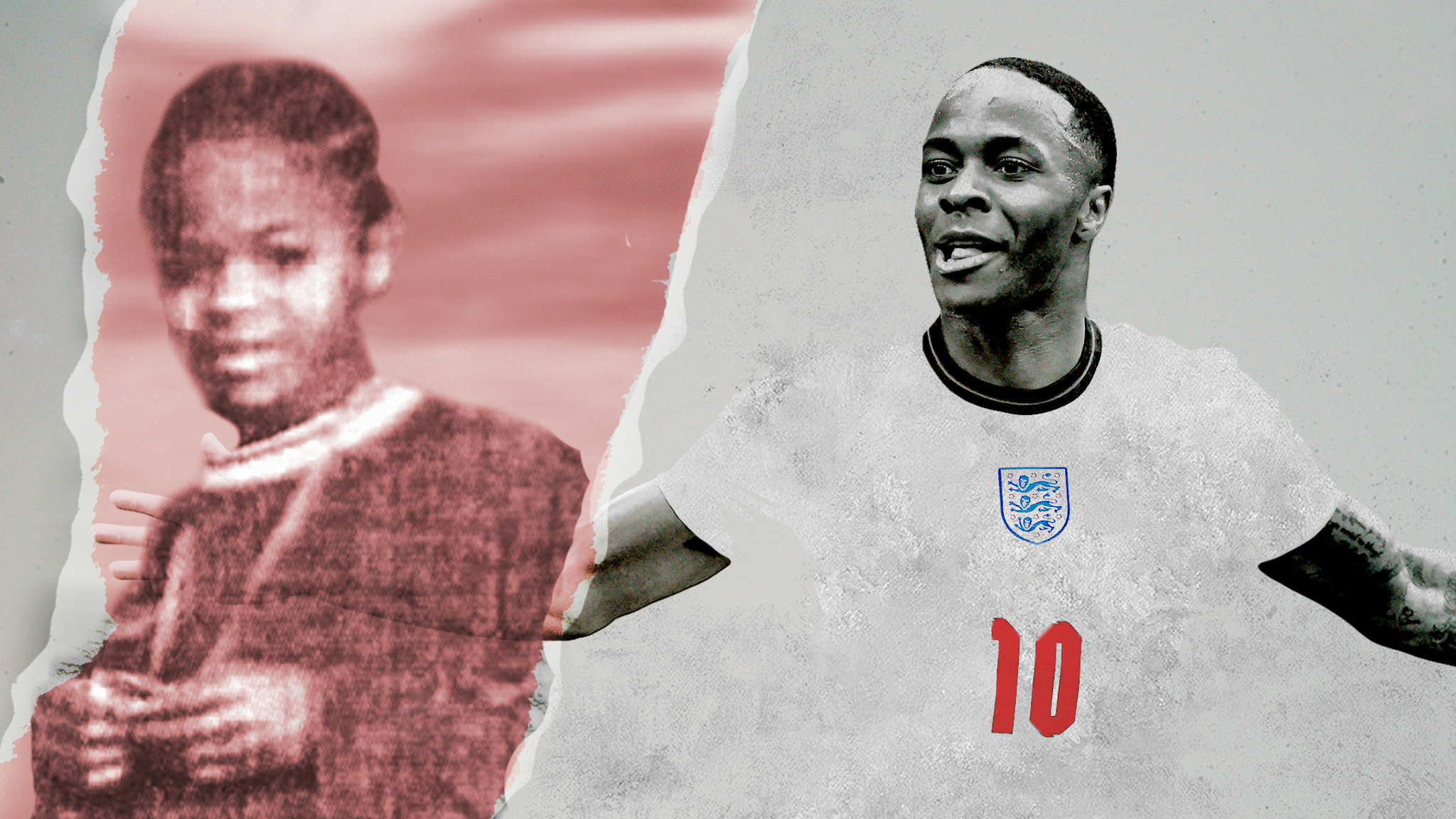 Raheem Sterling has been England’s star player at the Euros as the national team seeks to end 55 years of hurt and win their first major tournament since 1966.

The Manchester City forward was facing calls to be dropped before the competition but has proven his doubters wrong with three goals in four games – including the crucial opener against Germany as the Three Lions sealed a place in the quarter finals.

Once the most expensive English player of all time, Sterling has spent a decade in the spotlight after breaking into the Liverpool team aged just 17. 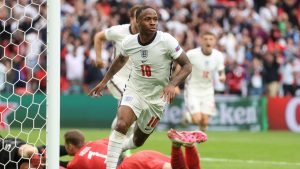 After facing a family tragedy in his youth and newspaper controversies in his early career, he has taken a leading role in fighting racial abuse in football and beyond in recent years.

So what do we know about the “boy from Brent” who is carrying the hopes of a nation at Euro 2020?

Born in Jamaica on 8 December 1994, Sterling was just two years old when his father was murdered.

“Not long after that, my mum made the decision to leave me and my sister in Jamaica and go to England so she could get her degree and give us a better life.”

Living with his grandmother in Jamaica’s capital Kingston, Sterling recalled feeling jealous as he watched other children with their mothers.

“I didn’t fully understand what my mum was doing for us. I just knew that she was gone,” he wrote.

“My grandma was amazing, but everybody wants their mum at that age.”

Aged five, Sterling moved to London to live with his mother and grew up in the shadow of Wembley Stadium – the home of English football – as he watched the new ground being built from his back garden.

He spent time at a school for children with behavioural problems, where one of his teachers reportedly told him “if he carried on the way he was going he would either be playing for England or he’d be in prison”.

According to his former coach, Sterling’s football talent was clear from an early age.

Paul Lawrence, who taught Sterling at Copland Community School in Wembley, first met the footballer when he was eight years old after hearing about his sporting ability.

“I had him play against children who were three or four years older than him and Raheem was running rings around them and scoring goals for fun,” Mr Lawrence tells Sky News.

“From that day I knew he was a very special talent.” 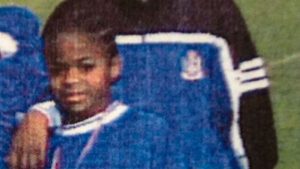 He describes the young footballer as “a coach’s dream”, turning up first for training and being last to leave, and says Sterling was skilled at dodging tackles from players “much bigger and stronger than him”.

“I definitely thought he would make it as a professional footballer,” Mr Lawrence adds.

In one cup final, Sterling scored a hattrick, set up another goal and was named man of the match – despite being in the year below everyone else on the pitch.

He also took pity on weaker teams he came up against in his youth, according to his former teacher.

“He wouldn’t go out of his way to score as many as possible because it’s kind of embarrassing for the team you’re playing against,” Mr Lawrence says. 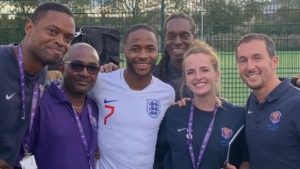 “He would pass the ball and encourage his teammates to make something happen or set a goal up for one of the weaker players.”

In later years, Mr Lawrence says he was contacted by England manager Gareth Southgate, then coaching the under-21s, who wanted to know more about Sterling’s ability and character.

“I gave him my honest opinion and thankfully he gave him a chance,” Mr Lawrence adds.

“He’s always been the kind of person to stand up against injustice or things he doesn’t feel are right.”

Sterling has returned to his old high school on several occasions, including giving away 500 free tickets to students and staff for an FA Cup semi-final.

He also donated a signed England shirt to the school, with a message saying: “To my favourite school in the world, Ark Elvin Academy”. 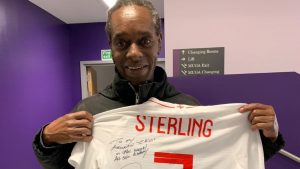 Sterling left London at the age of 15 when he signed for Liverpool in 2010, later saying there was “a lot of crime and stabbings going on” and moving to Merseyside was a chance to “go away and just focus on football”.

He was quickly hailed as a teenage sensation, forcing his way into Liverpool’s first team squad in 2011 after scoring five goals in a 9-0 victory over Southend in the FA Youth Cup.

His debut for Liverpool came against Wigan Athletic in 2012 aged 17 years and 107 days, as he became the third youngest player to have ever played for the club.

Sterling established himself in Brendan Rodgers’ Liverpool team as they narrowly missed out on the Premier League title to Manchester City in 2013-14. 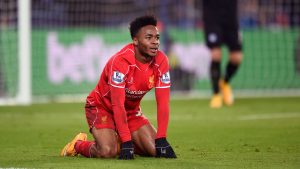 Sterling playing for Liverpool in 2014

During his time at Anfield, Sterling made newspaper front pages in April 2015 after footage appeared of him apparently inhaling nitrous oxide – or “hippy crack” – along with separate images of him with a shisha pipe.

At the time, Rodgers called for “perspective”, saying Sterling “didn’t do anything illegal”.

But he added: “It was something he will look back on in years to come and it probably wasn’t the wisest thing to do.”

That season was Sterling’s last at Anfield as he moved to rivals Man City for a record £49m in the summer of 2015, making him the most expensive English footballer ever at the time.

Since joining the club at the age of 20, Sterling has enjoyed a period of unprecedented success for the Sky Blues including a domestic treble in 2018-19. 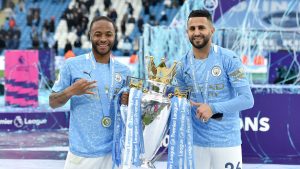 He has also become a mainstay in the England national team.

After making his debut in 2012, Sterling has won 65 caps, scoring 17 international goals, and he was part of the England team that reached the World Cup semi-finals in 2018.

But it has not only been his footballing ability that has continued to attract media attention.

Sterling was forced to defend having an M16 rifle tattooed on his leg in 2018 after it was splashed on the front of The Sun newspaper, featuring criticism from an anti-gun campaign group. 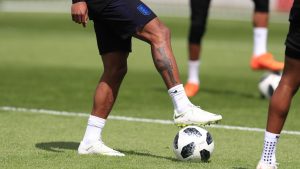 In a post on Instagram, Sterling explained the tattoo had “deeper meaning” as his father had been “gunned down”.

“I made a promise to myself I would never touch a gun in my lifetime, I shoot with my right foot,” he wrote.

In recent years, Sterling has been a leading voice in tackling racial abuse within football.

In 2018, he accused newspapers of “fuelling racism” with their portrayal of young black footballers, illustrating his point by using images of two Mail Online articles about club-mates Tosin Adarabioyo and Phil Foden purchasing houses for their mothers.

The headline referring to Adarabioyo, who is black, said the defender bought a £2.25m mansion “despite having never started a Premier League match”.

In comparison, the other article said “Manchester City starlet” Foden, who is white, was said to have bought a “new £2m home for his mum”.

“I think this is unacceptable,” Sterling wrote. “Both [are] innocent, have not done a thing wrong, but just by the way it has been worded this young black kid is looked at in a bad light.”

Sterling’s intervention came a day after he suffered racist abuse at Stamford Bridge during Man City’s match with Chelsea.

Sadly, it was not the first time, or the last, that he would be subjected to such abuse.

In December 2017, a man was jailed for 16 weeks after admitting kicking and racially abusing Sterling near Man City’s training ground.

Last month he was also subjected to racial abuse online less than 48 hours after a boycott of social media to highlight the issue.

After campaigning passionately for more to be done to tackle racism, it was announced in June that Sterling is being made an MBE for his work promoting racial equality in sport.

After a series of match-winning performances at Euro 2020, the principal of Sterling’s former school says many of her pupils see the footballer as a “hero”.

“It really feels like the boy from Brent has brought it home, it’s very exciting for us,” Rebecca Curtis, from Ark Elvin Academy, tells Sky News.

“Even though he’s now one of the most famous footballers in the world, he still feels like a boy from our community.