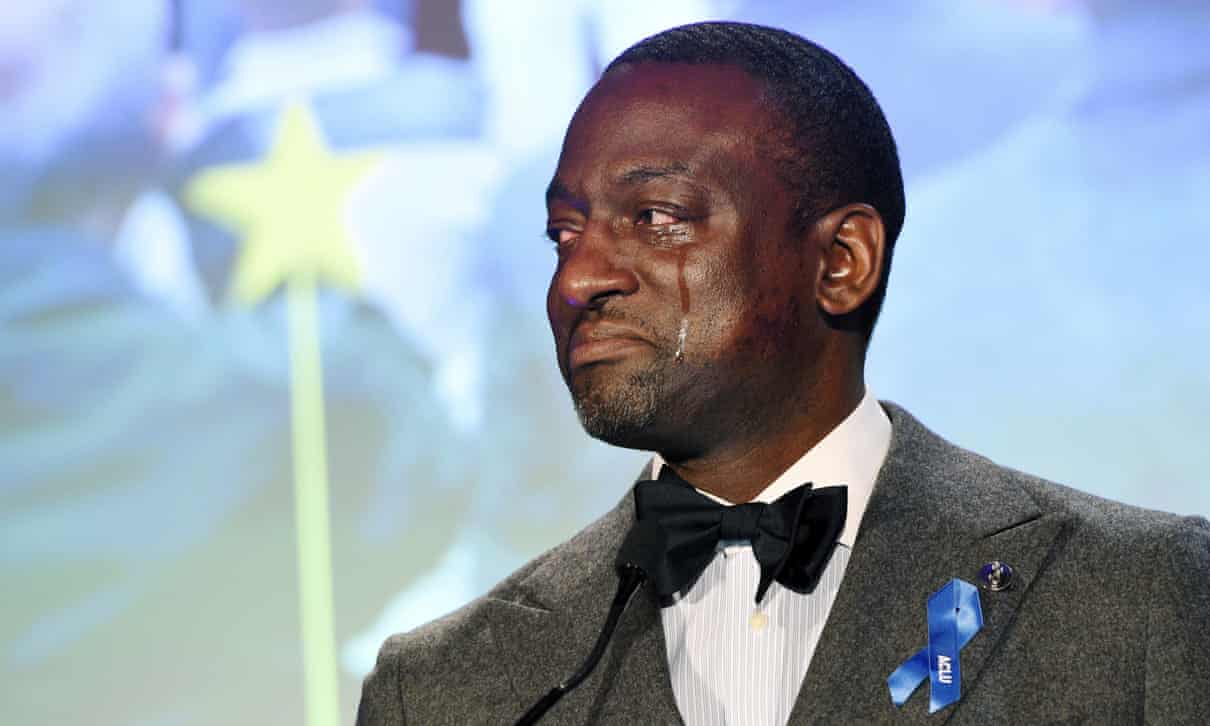 Yusef Salaam: ‘Trump would have had me hanging from a tree in Central Park’

If Donald Trump had got his way I wouldn’t be speaking to Yusef Salaam right now. “Had his ad taken full effect we would have been hanging from trees in Central Park,” Salaam says matter-of-factly. “People wanted our blood running in the streets.”

You’ve probably seen the ad in question: it’s infamous. In 1989, a white investment banker was raped and left for dead in Central Park. Five black and brown teenagers, including 15-year-old Salaam, were charged with her rape. Two weeks after the attack, before any of the kids had faced trial, Trump took out a full-page advert in multiple New York papers calling for the death penalty. His inflammatory stunt is credited with prejudicing public opinion and contributing to the Central Park Five – now known as the Exonerated Five – going to prison for something they didn’t do. The boys’ story was retold last year in the Emmy-winning Netflix drama When They See Us, directed by Ava DuVernay.

Salaam spent almost seven years behind bars; he had his youth ripped away from him. However there is no bitterness in the slim, softly spoken, 46-year-old man I’m talking to: you can come out of prison better, not bitter, he likes to say. Salaam, who is speaking to me from his home in Georgia, completed a college degree in prison and, when he got out, dedicated his life to educating others about what he calls the “criminal system of injustice”. He has 10 children (“It’s a blended family”), a successful career as a public speaker, a record of policy reform, and a lifetime achievement award from Barack Obama. Now he and the Haitian-American author Ibi Zoboi, a National Book award finalist, have teamed up on a young adult book partly inspired by his experience. Punching the Air, a novel-in-verse, explores institutional racism and the school-to-prison pipeline through the eyes of Amal Shahid, a 16-year-old black Muslim boy who is wrongfully incarcerated after a fight in a park leaves a white kid in a coma.

Punching the Air has been a long time in the making. Salaam first met Zoboi, who has joined our video call from her New Jersey home, in 1999; they were both taking classes at Manhattan’s Hunter College. Salaam had been out of prison for two years and was grappling with how to get back into the world: “I would tell anybody and everybody about what happened to me and how Trump rushed to judge us.” 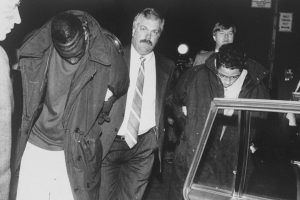 Flashpoint … Yusef Salaam, left, is led away by a detective after being arrested in April 1989 for allegedly attacking a jogger in New York. Photograph: NY Daily News via Getty Images

Zoboi spoke to Salaam at length; she was the editor of the college paper and wanted to report on how Trump had had a hand in his conviction. “To this day, that was the longest conversation I’ve ever had about Trump,” she says with an unamused smile. “I refuse to engage now.”

Zoboi didn’t end up writing that story. Salaam was still wary of the media; still wary that people would rush to judge him. “Part of the hesitation in telling my story in full back then was a fear of who would vilify me,” he explains. Salaam may have been out of jail but he was still officially labelled a sex offender; he wouldn’t be fully exonerated until 2002, when a prisoner called Matias Reyes confessed to the Central Park rape. “My mother had this experience where she was coming home from work at Parsons University when the case was going on — she’s a professor there, teaching fashion. She’s walking to the train station and a cop car goes past with the megaphones blaring: ‘That’s her! That’s the mother of that dog Yusef Salaam.’ So I’m knowing about things like this. And now here I am free again — but I’m free in body and mind without the truth having come out yet.”

Two decades later Zoboi and Salaam reconnected at a literary festival, where Salaam was promoting a self-published book of poems. Zoboi pitched him the idea of telling his story in the form of a young adult book and Punching the Air was born. The decision to tell his truth via fiction wasn’t about “a desire to tell it from a safe space”, Salaam says, but to universalise it. “The system wants you to think that what happened to me was an anomaly. A mistake. But I’m not the only one, there are countless others. We wanted to tell the story of how this is not an anomaly. We wanted to tell ‘the story of the two Americas’; what it’s like to live in a world where you may not make it home because of racism and systemic oppression.”

While Punching the Air is not an autobiography, Amal is very much based on Salaam. Zoboi and Salaam would spend hours talking and Zoboi turned those conversations into poetry. “We needed to capture the raw emotion of this boy,” Zoboi explains of the decision to use free verse. “Sometimes with prose you get muddled in all the other details that don’t matter in that moment. But when you pare down the language to make a list poem or put words in a certain shape to convey a certain mood, it’s much more powerful. Poetry gets to the heart of the matter and we needed to capture the heart of this boy. Because it’s not just a story about race, or about a crime. It is, first and foremost, a story about a human being; about a child, about a boy.” 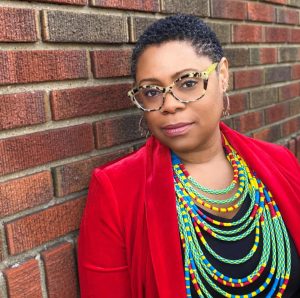 It’s also a story about who gets to be a boy; who gets to make mistakes. Research shows that African American students are nearly four times as likely to be suspended from school as their white counterparts for exactly the same behaviour. “What we want the readers to take away from the book is that some people get away with mistakes and some people get punished severely for those mistakes,” Zoboi says.

Amal is a gifted artist who gets into a good school, but there is no room for error for a kid like him: “I’m thinking it should’ve been called / Zero Tolerance Academy, or / No Second Chances Charter School / or Prison Prep.” His white art teacher, Miss Rinaldi, doesn’t see the real Amal, just the stereotype of an angry black boy. “I failed the class / She failed me,” says Amal. Miss Rinaldi serves as a character witness for Amal in his trial and it is her mischaracterisation of him that ends up sending him to prison. She is, Zoboi explains, what young people these days call a “Karen”.

There will be a lot of Miss Rinaldis reading this book, Zoboi notes. “Librarians and teachers: those industries are dominated by white women. And I find that so ironic given the crime that Yusef was accused of committing. I don’t think Yusef could have imagined, back in 1999, it’d be like, you know what? We’re gonna write a book and a lot of white women are gonna read it. And that guy who was responsible for convicting you? He’s going to be president.”

“It’s important,” says Zoboi, “that we have some sort of reconciliation between white women and black men. Right now there’s a lot of guilt. There’s a lot of coddling in the classroom – it’s a dynamic founded on guilt and not empathy. Reading this book out of guilt is not our hope, right? You know: ‘Poor thing, you’ve experienced such injustice. I’m so angry. I want to cry.’ That is not how we want readers to read the book. We want them to ask: how did I fail the young black people in my life? In what way was I a Miss Rinaldi in my students’ lives? It’s not about guilt, it’s about being accountable for being part of a system.” 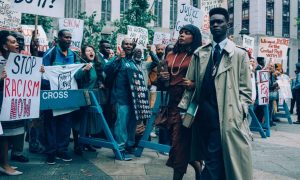 Aunjanue Ellis as Sharon Salaam and Ethan Herisse as as Yusef Salaam in When They See Us, which dramatised the Central Park Five story. Photograph: Atsushi Nishijima/Netflix/Kobal/REX/Shutterstock

With issues like defunding the police becoming mainstream talking points and the Black Lives Matter movement going global, Punching the Air feels particularly timely. However, as Zoboi notes, it has always been painfully relevant. They could have written the book in 2012 when Trayvon Martin, an unarmed black teenager, was killed. They could have written the book in 1999 when Guinean immigrant Amadou Diallo was fatally shot by four New York City police officers, who were all found not guilty. It may feel like we’re on the brink of change at the moment, but history warns us not to expect too much. “We have lived long enough to see change not happen in a big way,” Zoboi says. “Because Salaam and I are parents, we have to be hopeful for our children. At the same time, change is going to be incremental not monumental. Small steps. And this book serves as one small step.”

How has social media changed things? Salaam was convicted before there were hashtags, before viral videos shone a light on police brutality. “The worst part about social media is that we hoped that, as we told our stories, the oppression would stop,” Salaam says. But it hasn’t. “Social media has allowed us to be more aware but it doesn’t seem that awareness alone makes anything change,” Zoboi adds. “It seems like the more awareness we have, the more pushback there is. It seems like white supremacists have doubled down because of our awareness.”

This isn’t to say that we should give up hope. Amal means hope in Arabic. And while rage and frustration simmer through Punching the Air it is, ultimately, a hopeful book. If there is one thing Salaam wants readers to take out of the story it is “to never give up hope on themselves. To understand that you were born free and that you were born mattering.” But what about Salaam himself? As the 2020 election, and the possibility of another four years of Trump looms, is Salaam hopeful? He is quiet for a moment, thoughtful. “My experience has taught me to prepare for the worst,” he says, “but to hope for the best.”

Ghana: Blitz the Ambassador to direct The Color Purple musical film
Bernard Mensah gets top job at Bank of America