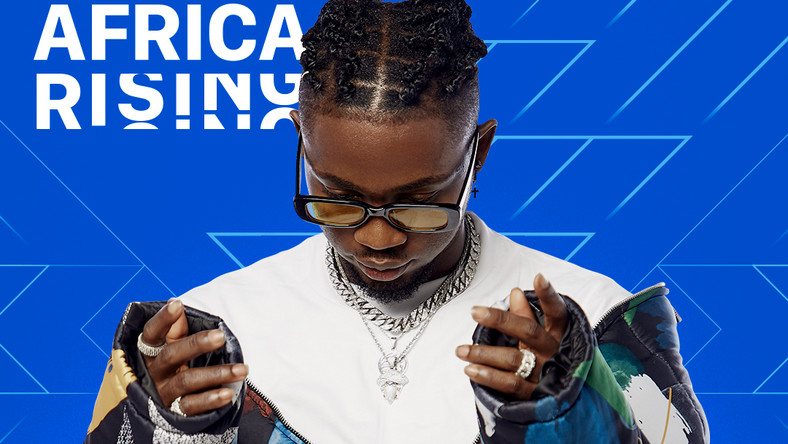 “I have always used Apple Music, seeing my favorite artists on playlist covers and features but here I am looking pretty as Apple Music’s first Africa Rising artist. I am overwhelmed, dreams really do come true,” says Omah Lay.

Every two months, Africa Rising will feature an artist selected by Apple Music’s editorial team on the continent and use the full force of the platform to amplify them to music fans in Africa and around the world.

The program also includes a companion playlist featuring the Africa Rising cover star plus the continent’s hottest new and emerging artists across all genres.

“I’m so excited that my fellow Nigerian Omah Lay is Apple Music’s first Africa Rising artist,” said Cuppy, host of Apple Music’s Africa Now Radio. “This new program and its playlist will elevate the next generation of African superstars and bring them to the world.”

Omah’s musical journey started during his teenage years as a member of the rap group, Lil King. A few years later he swapped performing for producing, quickly becoming Port Harcourt’s go-to guy for a hit single, but he picked up the mic again when he realized he could use his newfound skills to advance his own career.

In 2019 he released two singles ‘Do Not Disturb‘ and ‘Hello Brother,’ both of which ended up on heavy rotation on Port Harcourt’s commercial stations, securing him a growing fanbase with each new milestone.

With a musical arsenal that draws from Afrobeats, R&B and pop, Omah’s debut EP Get Layd, which he released under indie record label KeyQaad, has been the #1 album on Apple Music Nigeria since its release in May 2020, with all 5 songs from the EP featuring on the Nigerian Top 10 singles chart.

About the success of his first project as a solo artist, Omah Lay says in an interview with Nadeska Alexis airing this Friday on Apple Music: “I wasn’t expecting all of this. I didn’t expect it to happen this fast and so soon, you know what I mean? But I’m grateful. I just made music, I put it out, and everybody’s loving it.”

What is Africa Rising?

Apple Music also selected Nigerian Afropop star Rema as its latest Up Next artist, following the addition of Burna Boy to the roster last year and Mr Eazi back in 2017. Up Next is Apple Music’s global emerging artist program.

The latest music from Omah Lay, along with that of his Africa Rising peers, is available now on the Apple Music Africa Rising Playlist HERE.

OUT NOW: “Contingency Plan” EP by Camidoh – Listen
Shatta Wale leads the world with 3 songs as the best in ‘top 10 2020 dancehall chart’ by US base platform, Ranker