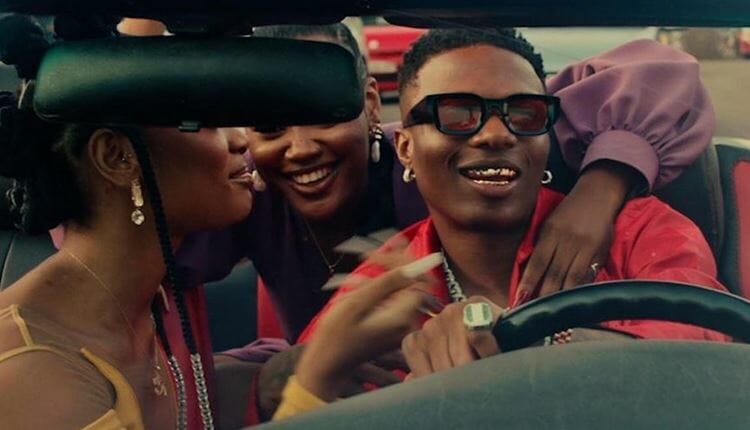 In 2021, Afrobeats attained new heights and shattered a different ceiling thanks to the success of Wizkid, Tems, and Burna Boy.

Global music predictions for 2021 didn’t include Afrobeats. There was no reason to, especially how coronavirus blighted the industry-leading to outcomes like concert cancellations and album delays. Before the pandemic, Afrobeats was already on a glorious trajectory.
Music streaming platforms caught on; Spotify and Apple Music both launched African playlists to curate the biggest songs from the continent. Last year, the UK launched its first Afrobeats charts to highlight the genre’s increasing global influence.

Crossovers into the mainstream are no longer a novel concept, whether by collaborations with international stars or standalone virality. In 2021, Afrobeats needed to attain new heights and shatter a different ceiling. This would manifest: Burna Boy won his first Grammy; Wizkid and Tems coasted through a pandemic-plagued summer with the feel-good hit of the year; and CJay’s Love Nwantiti reached critical mass thanks to the immense power of TikTok.

Right from the start, Burna Boy had believed in his own grandeur, so much so that he maximally subscribes to afro-fusion in defining his sonic craftsmanship, not to mention his Coachella fracas of 2019.

In the grand scheme of things, losing his first Grammy nomination for African Giant to Beninese powerhouse Angélique Kidjo last year was only a temporary setback. His music wasn’t just for mindless consumption anymore but became a totem of conscious Black thought. It was also reflected in press interviews and on his social media.

In an era of diasporic feuds amongst Black people and attempts at building a Pan-Africanist utopia for all identities, Burna Boy was an interesting voice in the mix. When, in March, he garnered his second Grammy nomination for Twice As Tall in the same category that sloughed off logics of colonization, it was a watershed moment.

No homegrown Nigerian artiste had been a recipient for the award, from the broader pantheon that includes King Sunny Ade, Sade Adu, Seal, Cynthia Erivo to Kevin Olusola, whose American acapella group Pentanix won the Best Country duo/group performance for their spin on the classic song “Jolene.” Burna Boy’s Grammy win puts him in a separate pantheon.

As the world was gradually opening up from digital hibernation — award shows, limited capacity leisure spots, vaccination-required concerts/festivals — the pandemic breathed new scares with the Delta variant. Incidentally, CKay’s “Love Nwantiti” had returned for a bigger viral wave that engulfed TikTok and beyond, putting the world under a delicious spell. First released on his 2019 EP CKay the First, the remix with Joeboy and Ghana’s Kuami Eugene ensured it was a commercial success in Nigeria. But it would be the DJ Yo and AX’el remix that would blow up TikTok like a supernova, prompting further versions in different languages and the beginning of chart success, notably his first Billboard Hot 100 entry.

The marvel about “Love Nwantiti” was that its TikTok virality wasn’t orchestrated by CKay. Curling lush, emotive R&B vocals around a backbone of Afrobeats, the result is a lulling, calming effect. At 26-years-old, this global smash hit enabled CKay to reach crossover stardom in what might have taken others more than a decade. But there are implications from this singular event on the Nigerian music industry, which might see more songs snappily designed for TikTok to reach virality.

The opposite was true for Wizkid’s “Essence” featuring Tems. Long before it became the song of the summer, there was a mystifying aura around Tems and her background story. In the industry, she had sonically bewitched both mainstream and alternative courts with her early singles, something quite impossible to do especially by an emerging artiste.

Her sartorial sensibility was slightly monastic; her body was never captured in its entire view and this was seemingly her doing. This brought up conversations about female artistes performing objectification for the male gaze, and the entitlement that men feel when this is absent. She was doing music how she wanted, her vocals striking between nasal tones and smoldering. So the collaboration with Wizkid made practical sense, further enlivening his much-awaited fourth studio album Made In Lagos released in 2020.

The matrimony of both artistes’ fanbases culminated into a homegrown smash. On the other hand, the song’s globe-trotting success can be partly be attributed to the album’s deluxe edition which recruits Justin Bieber for the remix. This was in August. Again there’s Tems, who, to most listeners in crucial markets, was unknown. And this curiosity was titillating. It drove another layer of seduction and appeal for “Essence,” anointed by the Black diaspora as a critical summer anthem.

In an unrelenting pandemic, the song’s warm, tropical rhythms expressed for people the places they couldn’t go and desires for better horizons.

Along with the reprieve the year offered from the claustrophobic lockdowns of 2020, budding talents emerged on the local front. Introducing Ayra Starr, the 19-year-old singer ceremoniously unveiled on Instagram by music mogul Don Jazzy at the start of the year. Ayre occupies a unique vantage point, marrying pop aesthetics with West African sensibilities through the anxious lens of teenagehood. With the release of her dazzling debut album 19 & Dangerous, Ayra is ready to take over.

There are many more promising acts that became more visible this year, from Buju, Ruger to Lojay, whose Afrohouse-tinged song “Monalisa” gained insane airplay on Nigerian radio and topped Shazam’s global Afrobeats chart. Nigeria as a repository of Afrobeats talents isn’t bound by space or time, so bring on another calendar year.

Burna Boy Chats with Zane Lowe About His New Single “B. D’OR” & 2021 Highlights
Jefe sets to spice up the music scene with variety of flows