FROM DEEP underground in Montreal to under the Congo sun, the Moonshine crew are back with their Afro-centric, bass-heavy electronic sound, which combines inventive production and traditional instrumentation with vocals sung in African French, Swahili and English.

The Moonshine collective pushes past borders and boundaries to radiate its dancefloor energy in all directions – a phenomenon that’s captured perfectly in ‘SMS for Location Vol. 4’ – which crosses genres and continents to follow the producers, DJs and MCs from Montreal’s legendary parties to underground UK clubs, Parisian Afrobeats soirées and Kinshasa’s booming electronic scene.

This ambitious collaboration has Pan African roots but is also fully global, featuring contributors from Africa, North and South America, Asia, Europe and the UK. 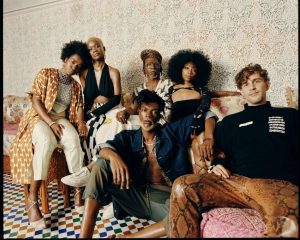 The artwork for ‘Onward’ features a lukasa – a tablet/memory board from the Luba empire used to recount history in their rituals by diviners. Known for his remixes of Aaliyah, Drake, Little Dragon, Nas and The Weeknd plus his own Baile Funk EP series Da Rocinha and recent full-length ‘In the Comfort Of’, Seattle-based Sango has produced music for Bryson Tiller, Tinashe, Mick Jenkins, GoldLink, Wale, Smino, and Xavier Omar. 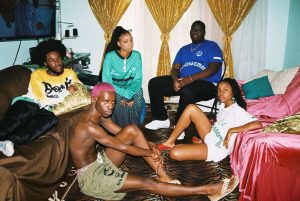 Written in partnership with Moonshine co-founder Pierre Kwenders, ‘Lelo’ weaves its laid-back party beat with a lyrical thread of perseverance and dedication to creative work. Kalume, who launched into the public eye on musical reality show Vodacom Superstar in 2011 and joined its jury just a few years later, shows a depth of style and emotional expression in vocals originally recorded in Kinshasa in December 2020.

This new mixtape/album was completed in Kinshasa, DRC and also serves as a soundtrack to the forthcoming film/documentary ‘Zaire Space Program’, which follows Moonshine’s first pilgrimage to Congo, exploring the collective’s roots and documenting collaborations between artists from Montreal and Kinshasa.

The result is a true-to-life perspective on the significance of that collaboration, intertwined with conversations around the shaping of an African Utopia and the relationship between technology and culture on the continent.
The first excerpt of the film, featuring the track ‘Ginseng’.

It was filmed with Congolese artist collective FARATA in a township of Kinshasa, and directed by award-winning Congolese director Nizar Saleh Mohamed, with co-direction by Kwenders and Hervé “Coltan” Kalongo.

It was filmed in one of the artist’s neighbourhoods to depict the reality of life in Kinshasa, capturing the local response as the crew walk through the city donning vibrant costumes that weave together transformation and tradition.

“We get to witness in these images the powerful language of percussive music, the ancestral language of traditional costumes in DRC, the social commentary the artists are making by using plastic and other discarded materials to create new forms of these costumes,” Kwenders says.

“We see all these perspectives. The collective works together embracing the theory of Congolese utopia, which resonates with Moonshine’s Afro-utopian vision.”

About Moonshine: Depending on whom you ask, the esoteric effects of lunar cycles can be wide-ranging: good fortune, human fertility, ocean tides, werewolf prevalence and loss of sanity among them.

For the like-minded musicians, DJs, dancers and visual artists who make up the Moonshine collective, the planetary satellite above all inspires their eponymous monthly event, driven by an inclusive ethos and a shared love for experimentations in dance culture.

Since its founding in 2014, Moonshine has carved out an enviable niche in Montréal’s nightlife milieu by celebrating a wide range of fledgling local talents, championing Afro-futuristic music, and bringing together communities that wouldn’t necessarily cross paths otherwise.

As the name indicates, the lunar-based Moonshine recipe has the collective throw an all-night, sensory-soaked party on the Saturday after every full moon in ever-shifting, unpredictable locations across the city, always strictly disclosed via text messages.

With fresh cuts supplied by resident DJs Pierre Kwenders, San Farafina, Odile Myrtil and AKantu, visual installations by Boycott, and a slew of live musicians and performers that have included Kaytranada, Dâm-Funk, Le1f, Venus X, DJ Windows 98 (Arcade Fire’s Win Butler), Bambii and Branko, the parties have become a staple of the after-hours scene in Canada and abroad, with appearances in NYC, LA, Paris, Brussels, Milan, Lisboa, Barcelona and Santiago.

“The essence of Moonshine came out of parties we used to throw in our kitchens,” recalls Kwenders.

“We felt like we couldn’t go out and find what we had cooked up in that kitchen. It’s one of the reasons we started Moonshine: to share that with more people who felt just like us, and who didn’t have access to such sounds or vibes.”

Still going strong four years on, Moonshine has also begun making use of the aesthetic, network and structure it established with the parties to promote affiliated artists, expanding its vision from ephemeral moonlit soirées to an expanding catalogue of genre-busting music, art and apparel.