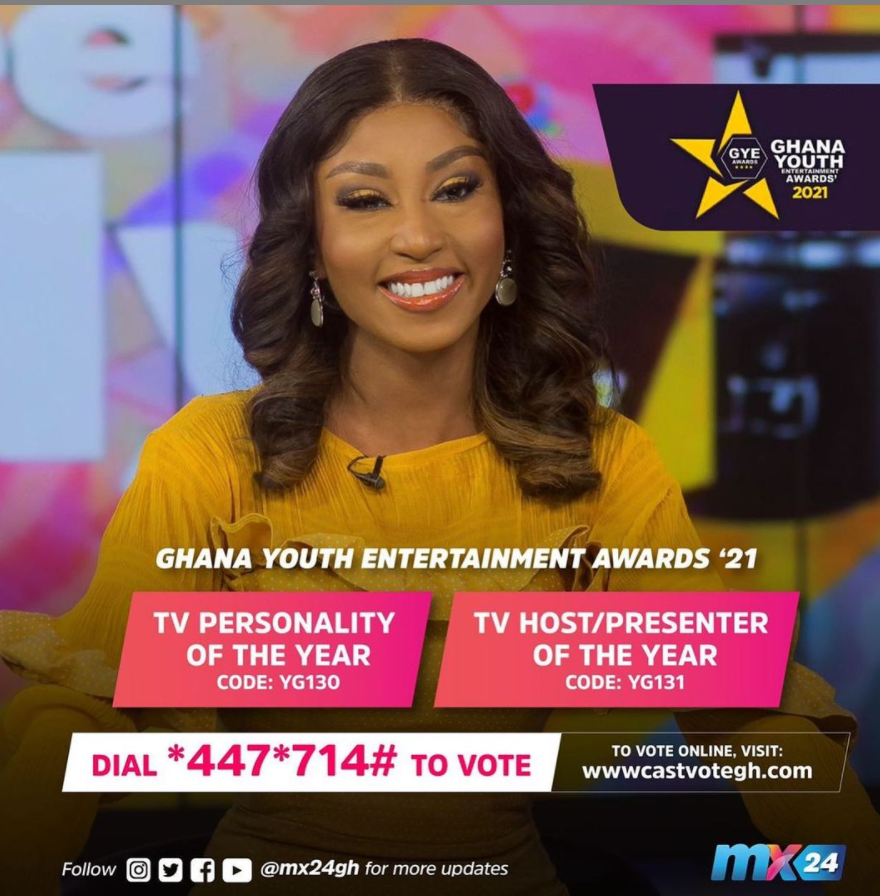 Co-host of MXTV’s morning show ‘The Am Club’ Edma Ohemaa Lawer has attained two nominations at this year’s Ghana Youth Entertainment Awards 21 in the ‘TV Personality of the Year ‘ and ‘ TV Host /Presenter of the Year ‘ category.

The young French national of Ghanaian descent Edma Ohemaa Lawer also known as ‘Ohemaa Ghana’  was the host of the  GHOne’s engaging and enlightening TV shows ‘Toast’ and ‘TLS, aired on Sundays and Saturdays respectfully. She was a News Anchor and TV Presenter at GHOne TV. Ohemaa says she is passionate about the Oil and Gas industry, politics, TV presenting, charity work, and fashion

Ohemaa the second of three girls was born in Paris, France by Ghanaian parents. Her father hails from the Central Region of Ghana and her mother from the Bono Region who are currently based in the UK.

The pretty-faced fashion influencer and 2nd runner-up of the Miss Ghana UK 2011, holds a Bachelor’s degree in Oil and Gas Management and a Master’s degree in International Relations and Democratic Politics. In 2016, she was assigned to support and work as the ambassador of Project Souls4Soles which she said allowed her to make a great impact in the lives of several children in Africa.

She is the CEO of YEWGlobal, an NGO to empower young adults through networking events and daily inspirational quotes. Edma is also the CEO of Eldon Oil, Gas and Natural Resources Consultancy firm. With an educational background in International Relations and Democratic Politics, Ms Lawer plans to use her platform and knowledge to impact Africa.

In May 2017, Ms Lawer came up with the idea to help young entrepreneurs advertise and promote their businesses through interviews in a form of questionnaires provided by herself on her blog due to the high level of views she received every day. Each week, a Young Entrepreneur of The Week (@YEW_GLOBAL) is selected by Ms Lawer and a blog about their various businesses and themselves is published on the website. The blog’s sole purpose is to encourage and motivate other young adults to become entrepreneurs at an early stage of their lives by proving to them that it can be done.

In 2010, Ms Lawer started working for an online TV channel called XposureTVonline where she was in charge of the social entertainment of the African and Caribbean community as a presenter on ‘What’s on Weekly’. She covered events such as movie premieres, celebrity video shoots, and photoshoots, beauty pageants, and much more.

During her reign as 2nd Runner-up, she intelligently and successfully used her platform to boldly emerge into the entertainment industry as a host/TV presenter and a model by breaking the odds and becoming a household brand presenter for AkwaabaUK.

Along the years, Ms Lawer has hosted several shows and events in the UK, Ghana and around the world such as The Ghana Movies Awards, Project Walkway Ghana, Miss West Africa UK, Miss African Queen Switzerland, Miss Ghana UK, The Sarkodie, and Amakye Dede concert, Ghana Rocks concert, London Fashion Mist and many more. Edma has also made several TV appearances on ABN TV, BEN TV, VoxAfrica, one, and Tv3.

Edma Ohemaa Lawer stimulated with ambition and confidence, strives to impact the Oil and Gas industry, the political sector, and the entertainment industry by using education as her main source of enforcement to inspire young women and every individual around the world.

Edma believes in a saying her mother always tells her: – “Why should the skies be your limit when there are footprints on the moon”- which simply means, never settle for less and always aim for the highest level of your abilities.

Continue Reading
You may also like...
Related Topics:EDMA, mx24