It tells the story of a young girl navigating life in her hometown and the special relationship she has with her father, who has influenced her musically.

Having contributed immensely to the development of the XiTsonga language, it is only fitting that Chauke features in this reflective video as Madjozi is a proudly Tsonga woman who has made it her mission to always pay homage to her culture in her music. 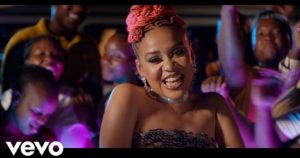 “I felt so blessed to be the studio with the great Dr Thomas Chauke. We were working and creating and combining our sounds. And the moment really hit me just after we finished making the beat. That I’m really here. This is a dream come true. He asked me what I want to sing about and I told him I wanted to sing about how unbelievable it was to have the opportunity to be there working with him. So we sang about where we’ve come from and celebrated where we are now.”

The song and video both work together to encompass a true reflection of Madjozi’s life, how far she has come and how her culture, language, and heritage all play a role in the star she is today.

“Shahumba is about our journeys as two musicians from rural Limpopo who have been able to achieve our dreams despite the challenges. I look up to Dr Thomas Chauke so much, so we decided to tell it as a sweet story of a father and his daughter. It’s a beautiful and heart warming video about victory.”

Staying true to her roots while dominating the music industry internationally, shows how much of an inspiration and role model Sho Madjozi really is.