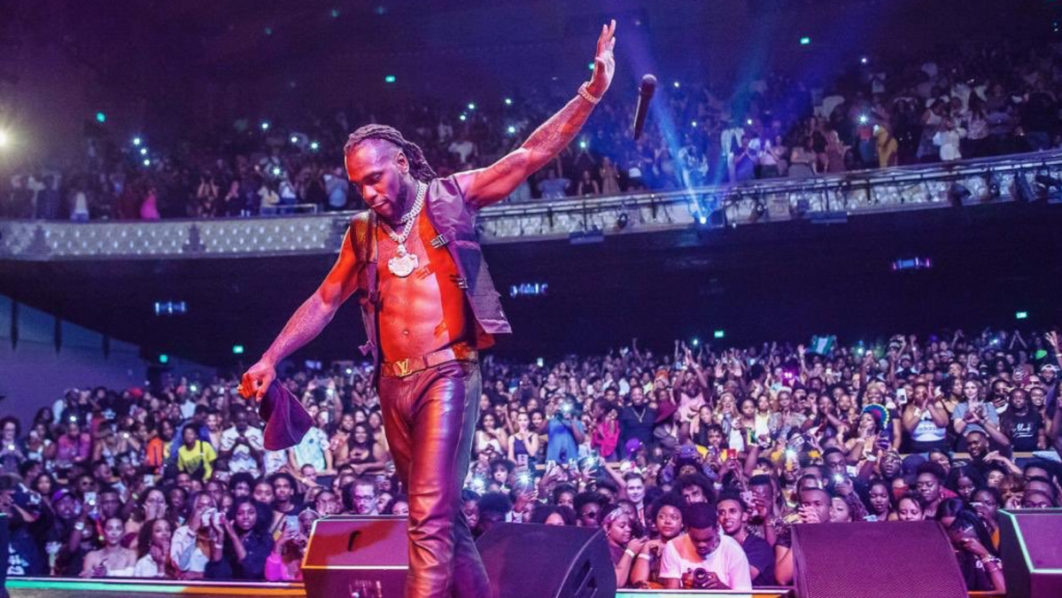 Once again the African Giant has proven his greatness by being the first Nigerian to win the award for the Best Global Music Album category at this year’s Grammys with his Twice as Tall album.

The Grammy nomination described the album as “a master class in the vibe and hustle that has made Burna Boy an international musical force”.

Let’s unpack this 2021 Grammy award winning album by Damini Ebunoluwa Ogulu as he is known in real life. 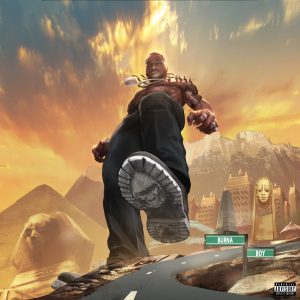 The cover of the album depicts the artist as a giant standing over a modern-day asphalt road with the ancient pyramids of Giza behind him.

The Egyptian pyramids were royal tombs built for three different pharaohs and they are also part of the Seven Wonders of the World.

In correlation to his craft, one would say Burna sees himself as a Pharaoh and wonder in the music industry.

The bottom of his shoe is an image of an ape and in Nigeria, apes are thought to possess spiritual powers.

The first song on the album is ‘Level Up’.

In one of his verses, Burna says “I remember when I couldn’t level up ‘Cause the Grammys had me feeling sick as f*** throwing up and s*** Asking questions like, “Why it wasn’t us?’”

In 2020 the artiste got his first nomination at the Grammy Awards in the World Music category for his album African Giant. He lost to Beninese-American singer Angélique Kidjo.

From his lyrics, one can tell that Burna was upset about his loss in 2020 only for him to level up and win in the same category barely a year after releasing ‘Twice as Tall’.

The Senegalese feature with singer Youssou N’Dour broadens his fan base which once again cements his place as the African Giant.

From levelling up we get woken up by ‘Alarm Clock’ the first song we hear on the album produced by American rapper Diddy. This track is a wakeup call to his African brothers and sisters to thank the Lord and make the most out of each day.

Transitioning into ‘Bebo’, the musician is telling us he has no desire to pretend and he has come this far without God’s grace.

A change of direction on ‘Wonderful’ as he brings us an upbeat, lively jam in Yoruba and Pidgin verses.

‘Onyeka (Baby)’ is Burna Boy’s fifth song out of the 15 track album. In this song, he is professing his love to a certain lady and checking her out. He promises to put money in her aza (Nigerian slang for bank account) but if she leaves, he will die because he has plans of making her the mother of his kids.

Burna compares his lady of interest to Nigerian singer/songwriter and activist, Onyeka Onwenu also known as the “Elegant Stallion”.

In his ‘Naughty by Nature’ he makes a strategic move by naming the song after his feature which is the American hip hop trio Naughty by Nature. This group first appeared on the music scene in 1989 and any old school hip hop head would definitely want to bop their head to this tune.

‘Comma’ is for your dancing pleasure.

‘No Fit Vex’ is an encouragement to all the hustlers. He knows that life is not easy but he hopes everyone makes it “I wanna hear better news about you and smile, and it dey ginger my soul”.

‘The music make me feel I be Jordan’ that’s the first line of his track” ‘23’. The musician is referring to legendary American former professional basketball player Michael Jordan who wore jersey number 23. In essence Burna Boy sees himself as the Michael Jordan of music.

‘From the Niger Delta, to all the corners of Africa
America and the world
Black people are turning the tables, taking back our place
We will be heard because we matter’

“If the government refused to develop the region
And continue, the marginalization and injustice
The youth that’s what coming after us
And it will be more brutal, than what we have done,”

An echo of the time as Nigerian youth rises demanding their voice be heard as seen in recent times with the #EndSARS protest.

Featuring Coldplay’s Chris Martin, an English singer and songwriter, this song deals with racial injustices and how colonial rulers made monsters out of Africans.

The song ends with a snippets of a 1987 interview granted by Ghanaian author and poet Ama Ata Aidoo.

“Since we met your people five hundred years ago
Look at us, we have given everything
You are still taking
In exchange for that, we have got nothing, nothing
And you know it
But you just think that this is over now?
Over where? Is it over?”

‘Wetin dey sup’ is Nigerian slang for what’s up? Or what’s happening? It’s also the title for track 13.

British rapper Stormzy features on ‘Real life’ with a hook that makes the listener reflect on their journey in life “Yes, we are blessed but it’s harder to see sometimes” also giving us some advice “Real life is for living
Use this life that you’re living, be free”.

Ending this 15 track masterpiece is ‘Bank On It’, The African Giant asks for forgiveness in any shortcomings as he is only human he also asks the Lord to protect him “And so as the day comes, as I go on
Protect me, Lord, I cannot trust my neighbours
Be my saviour
When that day comes
Defend me from my enemies and my neighbours”, a perfect ending to this musical work of art.

In summary, Wetin Dey Sup in this Real Life? Where people be Naughty By Nature but we No Fit Vex. You can Bank On It we go Level Up because we are Way Too Big to be the Monsters You Made.

Twice as Tall is simply a timeless master piece.