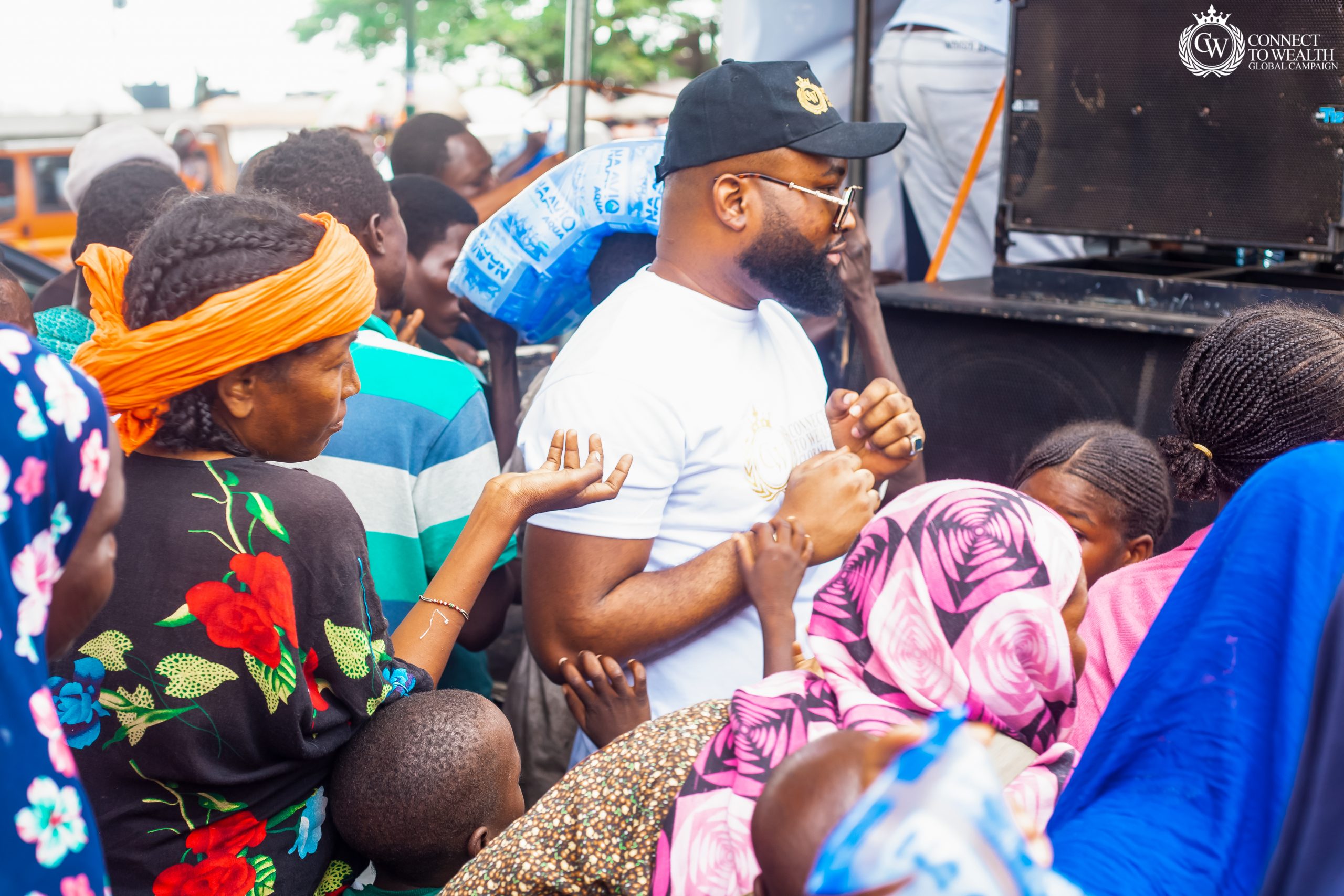 Connect to wealth’ joins Dr. Williams S. K. Anarfi to feed over 5000 people on the streets

In this harsh economic phase of the country and the globe, more than 5,000 food packs were distributed by the Chief Executive Officer of Wask Group of Companies, Dr. Williams S. K. Anarfi (Dr. Wask), in collaboration with “Connect to Wealth Global Campaign” to homeless children and porters.

Speaking to the business mogul and founder of the “Connect to Wealth Global Campaign,” the purpose of this good deed was to impact and reassure beneficiaries to keep their aspirations high in order to change their standard of living during the country’s economic downturn. 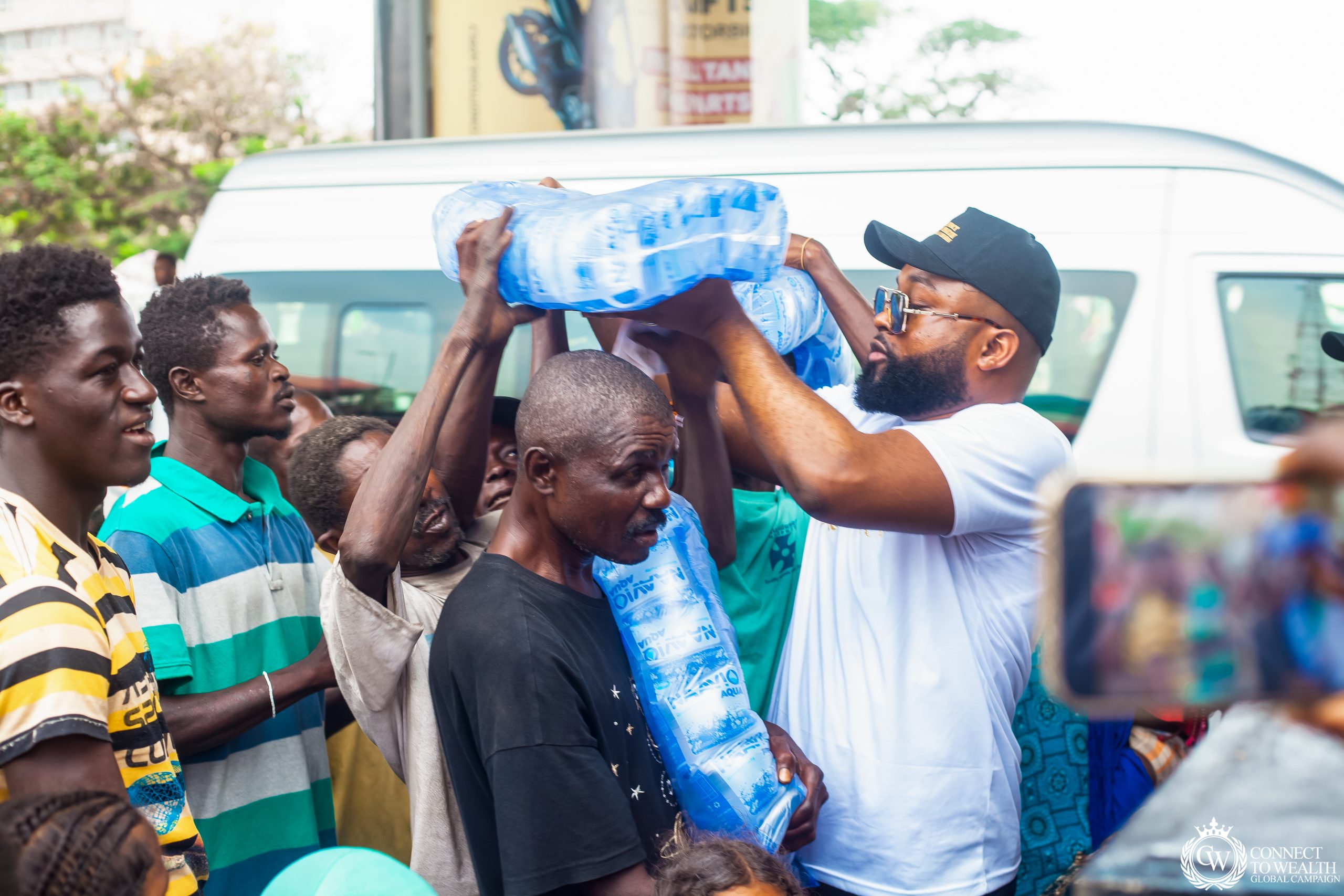 According to the 2010 statistics, there are over 90,000 street children and youth in Accra alone, which is the goal of SDG Goal 2, which seeks to end hunger, achieve food security, improve nutrition, and promote sustainable agriculture.

The project was part of Dr Wask’s birthday celebrations, and the organization cooperate social responsibility, this kind gesture to the less fortunate was admonished at Nima, Kwame Nkrumah Circle, and Kaneshi. 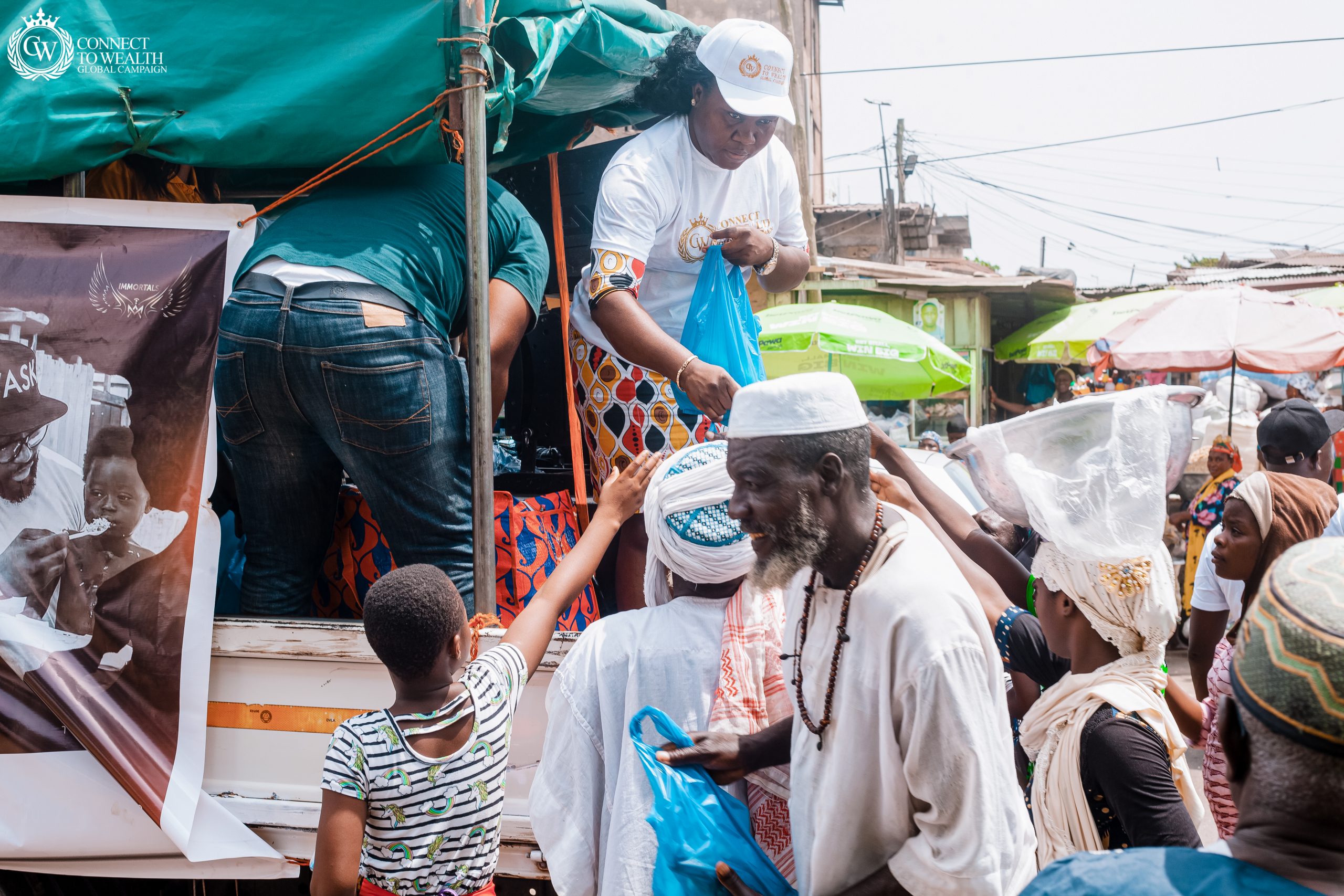 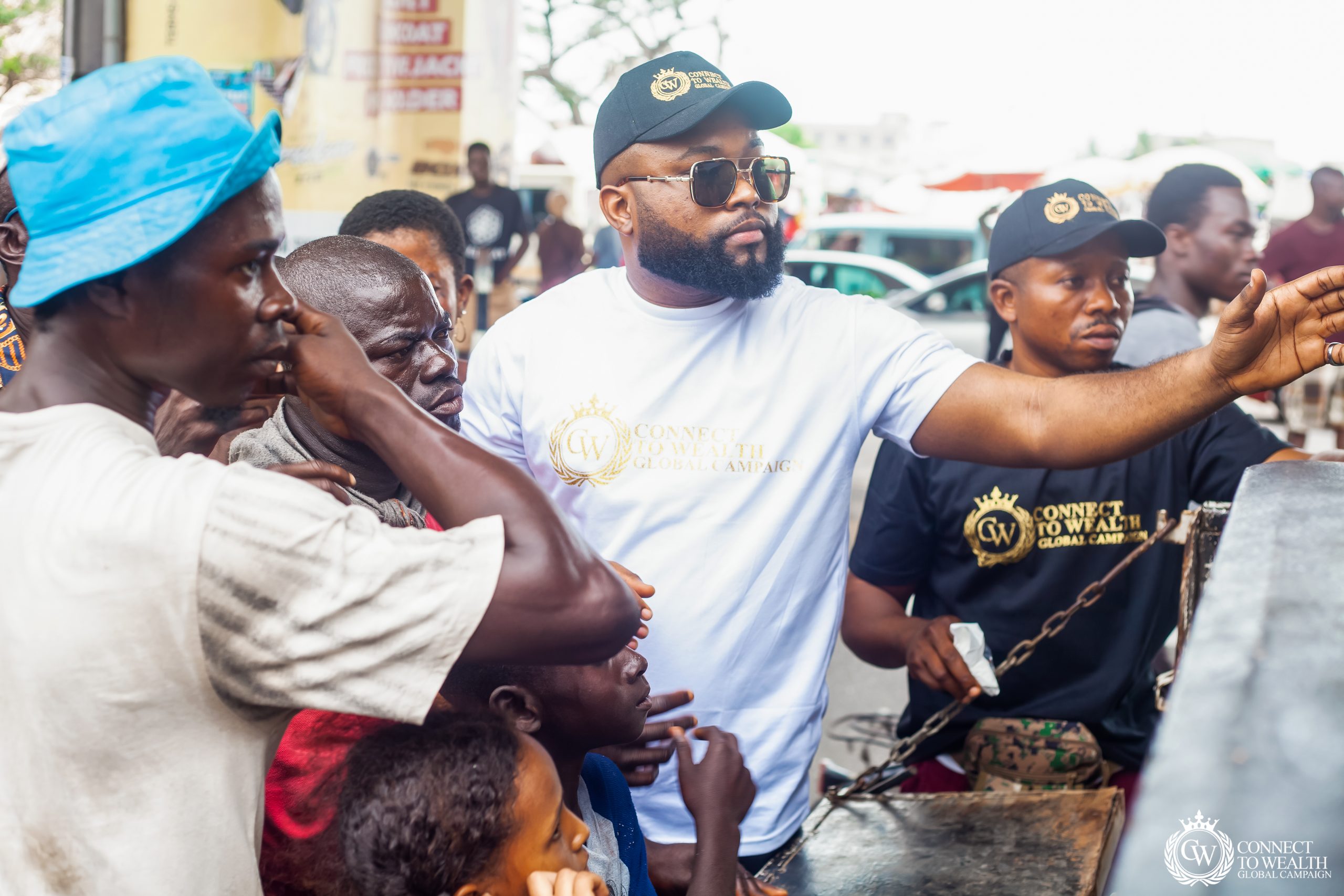 This year, the annual charity project took to the streets on Friday, November 4 and served the homeless free lunch packs, 100 packs of purified water and also bought some food and beverage vendors’ products without hawking under the sun.

Speaking about the charity project, he said, “It has always been in my heart to give back to the community.” “I understand the whole duty of man is to empower others.” “As a result, we have resolved to go on a charity project, namely, to feed over 5,000 orphans and street kids this Friday”

He added that this kind gesture will be repeated monthly to support the vulnerable in other areas of Accra.

Dr. Anarfi is a dedicated philanthropist who gives back to society through the formation of the WASK Family Foundation, which aims at alleviating poverty and creating a sense of belonging amongst the less privileged in society.

About Connect to Wealth

Connect to Wealth Global Campaign, a non-profit organisation dedicated to educating and assisting investors, entrepreneurs, workers, etc to make extra income, is set to have its worldwide launch on, Saturday, November 12.

This is a SMART Ecosystem, designed for the creation, multiplication and transfer of wealth through partnerships and collaboration with global brands, opportunities and teams.

Connect to Wealth Global Initiative is a global platform designed as a vehicle for knowledge sharing among professionals from various sectors.

The platform is designed with the mindset that wealth travels in the direction of knowledge and to get more people to understand the result of wealthy people who have walked the path before them is to give them what can be described as the wealth advantage.

Connect to Wealth Global Initiative is a movement of wealth transfer designed to uplift the downtrodden in the society through the creation of various opportunities on the Connect to Wealth platform.

The Connect to Wealth Platform creates and curates opportunities from various sectors and layers them around solutions that solve real problems. On this platform, there are many accomplished business executives from various countries and sectors using Blockchain Technology to transform lifestyles and create opportunities for individuals and organizations. We are currently building a high-tech website and application for all member.

He received the ‘honoree’ as the Best Business Innovator of the year at the Asian-African Leadership Achievement Awards and also was honoured for his outstanding entrepreneurial skills and proven track record of success, was bestowed the Innovator Award 2013 at KNUST during the Vice Chancellor’s Award.

In Ghana in 2020, he was honoured by the former President, John Agyekum Kuffour and also the Kumasi Leadership and SDG Awards Board for the difference he has made towards the achievement of SDG global vision in Kumasi.

Trash Recycling and Management Organisation (TRAMO) and the WASK group of companies are led by him.

Dr Williams S.K. Anarfi is an outstanding entrepreneur with a proven track record of success. He is the Founder and President of WASK Group, one of the fastest-growing consultancy agencies in Ghana.

He was also the pioneer leader of Vida Divina TLC, starting his own company at the age of 15, Dr Williams Anarfi Sarpong Kwaku (Dr Wask) is among the few Africans to lead Multi-Level Network Marketing. He earned the accolade of master networker according to Network Marketing Time magazine in the United States. This initiative has helped over 50, 000 people on the continent live healthy and wealthy lives.

He has the singular vision of bringing investment into the African Continent through his group, diplomatic support system, and strategic partners across the globe.

He is currently the leader of Total life changes in Ghana and has rejuvenated the re-birth of business in Ghana. He has rich and enviable experience in strategic innovation, business strategy, and in-depth expertise in SME advisory services, project financing, and development.

He is the founder and Chief Executive Officer of TRAMO GHANA, which specializes in waste management and recycling of plastics into roofing tiles and pavement blocks, sale and installation of biogas digesters, waste sensitization training in senior high schools, tertiary institutions, as well as corporate organizations. He also handled the branch of Circle Link Innovation in Ghana.

Dr Williams holds a satisfactory certification from the college of health sciences at Kwame Nkrumah University of Science and Technology. In addition to his credit, he has a Professional Certificate in Strategic Management. He also has a certificate from Charisma University and American International Theology University (AITU) as an active member in recognition of professional standing and demonstrated competence.

Dr Anarfi has established himself as a business network personality. He is also an Honorary Professor of the Academic Union, Oxford, UK, a global academic organization of over 200 university Chancellors, scientists, and researchers. He also holds a certificate from the department of international cooperation of the People’s Republic of China for undertaking an international training workshop on photovoltaic systems and applications with Yingli Solar at Baoding, China. He has also received certification from American InterContinental University for pursuing a Master’s Class in Leadership and Management.

He also spearheaded the United States Peace Corps Stars Project in Kumasi. He attained an Entrepreneurship award at the IPMATIC African Awards in 2014. He was awarded the title of “Best Network Marketer of the Year” in 2018 during the Humanitarian and Business Awards, which were held by Gymped.

He was also honored as the “Best Global Business Growth Influencer” by the World Changers’ Summit in Dubai in 2018. He received the Best Enterprise Award from the European Business Assembly and was appointed as the EBA Business Ambassador to Ghana and West Africa in Oxford, UK, in 2018.

He was on the team that designed the most current 40-year ‘National Development Plan’ for Ghana between 2014 and 2015. As a son of Africa, he has great plans to use his corporate, diplomatic, and personal network and influence to bring development to the continent through.