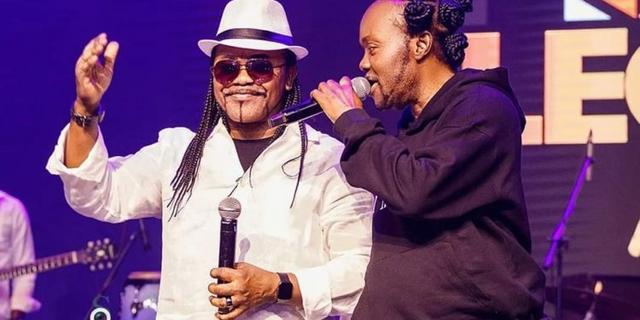 Veteran highlife musicians Daddy Lumba and Nana Acheampong have finally reunited after many years of beefing as they perform on stage together.

The two friends; Nana Acheampong and Daddy Lumba have been at loggerheads for a couple of years now. The two were known to have battled out each other through their songs and lifestyles.

The two veterans were seen performing together for the first time in many years during a musical show dubbed, “The Legends Night”.

During their performance at the Legends Night which took place at the Grand Arena of the Accra International Conference Centre (AICC), Charles Kwadwo Fosu known well as Daddy Lumba paid homage to former group member and friend Nana Acheampong.

According to him, Nana Acheampong introduced him to the Highlife genre and also contributed to his career.

“When I went to Germany, I was doing Gospel until I found Nana Acheampong who introduced me to Highlife. He has played a major role in my music career and I owe him a lot” he said.

Until the two fell out, they were a group known as Lumba Brothers.

Although the pair planned to release an album in 1986, financial constraints wouldn’t let them. The album was eventually released in 1989 with the help of Lumba’s wife, Akosua Serwaa, who produced the album. The title of the album is Yɛɛyɛ Aka Akwantuo Mu.

Continue Reading
You may also like...
Related Topics:Daddy lumba, Featured