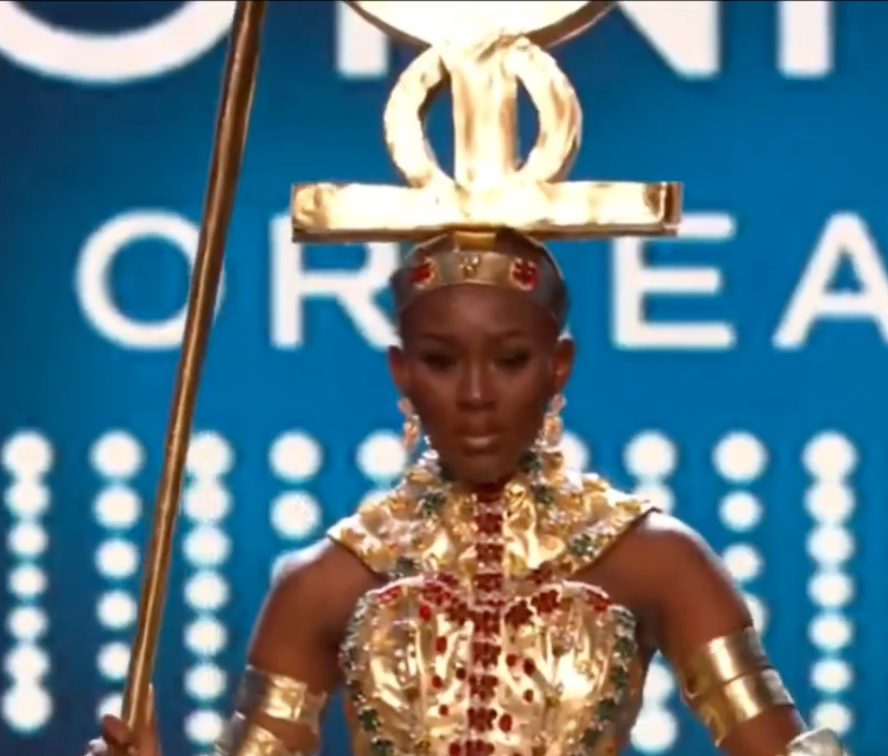 The 71st Miss Universe beauty pageant competition is currently underway in the United States of America.

According to a statement by the official Miss Ghana Universe Instagram page, the “Women of Wonder national costume worn by Engracia, is an elegant hybrid of royalty and courage. It features a golden armor bustier, a ball gown, a traditional stool headdress, and a trident as part of the basic components of the ensemble.”

“The golden armour and trident depicts the rare, heroic bravery displayed by the first and only known female war leader, Yaa Asantewaa, the gate keeper of the Golden Stool who marshalled an army of 5000 warriors in the military regiment of the ancient Asante Empire.”

Made from a gold satin fabric, the bottom section of the ball gown displays images of women, both educated and uneducated, who were pivotal in attaining political liberty for Ghana, while the traditional stool headdress projects a queen’s readiness to lead through servitude.

The gown is designed to pay homage to the powerful female forces of our emancipation and to remind the world that women also led capably. It also drives a message to remember women as heroes.

With this costume, Engracia hopes to share the strong message that women are not just reproductive vessels; women are more.

Engracia also gave a bold presentation in the swimsuit competition.

She walked the stage in a red swimsuit and a custom cape designed by Kuukua the Artist which she named the “Tree of Aspirations.”

It comprises three elements: a tree, a child, and a stream of water, and “seeks to create awareness of the dangers of illegal small scale mining, empower them, and equip them for a better tomorrow.”

Engracia’s first presentation on the Miss Universe stage has earned her cheers from her supporters in Ghana as they pray and hope she emerges winner in the final competition.

Continue Reading
You may also like...
Related Topics:Featured, Miss Universe