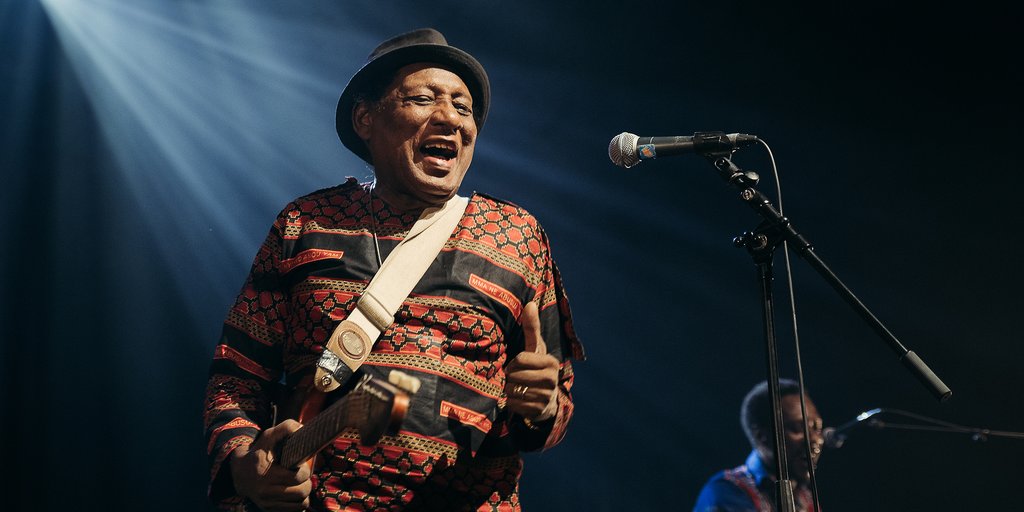 Ebo Taylor became one of Ghana’s major prolific musicians in the 1950s and ’60s, making his signature Ghanaian highlife that influenced the father of afrobeat, Fela Kuti.
As highlife and afrobeat music has entered the global stage, Taylor’s work has been sampled by international R&B artist Usher on his 2010 track “She Don’t Know,” featuring rapper Ludacris, and by Canadian hip-hop duo Ghetto Concept on their 1992 track “Certified.” His influence can also be seen in afrobeat’s clubbier offshoot, afrobeats (with an “s”), which has hit international charts through West African acts like Wizkid, who has collaborated with artists including Drake and Major Lazer.
And Taylor is still recording new material at age 84.
“Uncle Ebo,” as he’s known by locals in Saltpond, the small Ghanaian fishing town he’s called home since birth, has spent most of this year in his home studio observing Covid-19 protocols and recording new material for his third studio album in 10 years.
Since the release of his 2010 album “Love and Death,” as well as his collaboration with the Berlin-based Afrobeat Academy in 2011, Taylor’s international profile has been raised. In 2017, the release of Ghana funk anthem “Come Along,” made DJ playlists globally, according to Taylor. But Taylor’s newfound global fame is the culmination of his own influence on West African music since the early 1960s.

Born in 1936, Taylor grew up listening to the highlife music that has always been at the heart of his style, which fuses jazz elements with traditional highlife for a groovier sound. “I was inspired by the pioneering saxophonist and trumpeter E.T. Mensah and his band The Tempos,” he said in a recent interview in Saltpond.
“Fela never understood why as Africans we like playing jazz; he wanted us to be ourselves, be original and tell our stories,” said Taylor.
Taylor joined the Stargazers, a highlife band led by saxophonist Teddy Osei and drummer Sol Amarfio (who would both go on to form the legendary British-based Afro rock band, Osibisa) shortly after leaving college. In 1962, Taylor moved to London to study music at the Eric Gilder School of Music with funding from a government cultural program instituted by Ghana’s first prime minister and president Dr. Kwame Nkrumah, who secured independence for Ghana from British rule. It was in London that Taylor first met and collaborated with Nigerian saxophonist Peter King and Afrobeat legend Kuti.
“Fela used to come to my apartment in Willesden quite often and we’d spend hours playing records,” Taylor said. “When he came to Ghana in ’67, he drove to Cape Coast to see me and we spent the afternoon talking about African Unity.”
Taylor credits Kuti with pushing him, and others, to compose distinctly African music. “​He (Fela) never understood why as Africans we like playing jazz; he wanted us to be ourselves, be original and tell our stories,” Taylor said.
After moving back to Ghana in 1965, Taylor became the in-house guitarist, arranger and producer for the influential Ghanaian record label Essiebons, founded by music producer Dick Essilfie-Bondzie. It was during this period that Taylor recorded over 10 albums and put his stamp on projects by West African music legends like Pat Thomas, C.K. Mann and Gyedu-Blay Ambolley. The quality of Essiebons’ studio and the genius of Taylor made Essiebons one of the preferred recording studios for musicians from all over West Africa. Sadly, Ghana’s tumultuous political and economic environment throughout the 1970s and ’80s, marked by multiple coups and government reorganizations following the ousting of Nkrumah, stifled the development of its music industry and arguably Taylor’s rise to global stardom.

Yet Taylor’s influence can be seen across genres today, particularly with the emergence of afrobeats in the early 2000s, fusing afrobeat and highlife with EDM, hip-hop and reggae.
Taylor is quick to highlight the fact that the popularity of afrobeats has coincided with its embrace of authentically African arrangements and a departure from heavy hip-hop and R&B sounds which he believes could seem forced. “​The music we made was real music, it made you stop and think,” he said. “It’s not surprising that people are connecting with afrobeats more now that it is embracing elements from the music we made​.”
“I want to be remembered for my music, for my art…” said Taylor.
Taylor won’t say much about his highly anticipated new release. But it is uncharted territory for the guitarist and composer. He is working on it without support from two of his key collaborators: Essilfie-Bondzie, who became Taylor’s career-long executive producer; and Tony Allen, the legendary Nigerian drummer with whom he collaborated extensively on his recent projects. Allen and Essilfie-Bondzie died within months of each other earlier this year. Taylor fondly remembers both of them and lights up as he recalls his studio sessions with Allen. “The entire studio would freeze,” he said.”We just couldn’t understand how he was creating those sounds. Nobody knew what to expect next. It was magic.”
Over the last few years, Taylor has toured extensively throughout Europe with his Saltpond City band, marshalled by his son Roy, and has been more likely to be seen playing in Amsterdam or Berlin than in Accra or Lagos.
While Taylor is likely to slow down on touring, he intends to continue making music. “It’s what I love to do, it’s who I am,” he said. He intends to introduce his music to younger and more mainstream audiences and was keen to express his desire to collaborate with Ghanaian rappers M.anifest and Reggie Rockstone.
Like his hero Nkrumah, who Taylor believes is unique among African leaders past and present for his concern for the common man, Taylor wants to be remembered as a man of the people — not as a rockstar. “​I want to be remembered for my music, for my art and as Ebo Taylor the man​,” he said.
Source: Edition.cnn.com

Continue Reading
You may also like...
Related Topics:Ebo Taylor, Featured