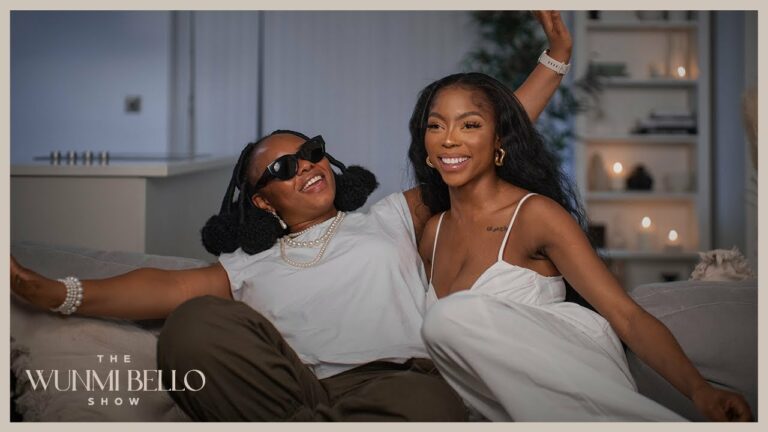 Yemi Alade sits with Wunmi of “Wunmi Bello Show“, and guess what?… She hates fairy tales!

Yemi Alade was propelled into the music industry thirteen years ago after winning the Peak Talent Show. Since her win, she has proved to the world time and time again that she is not only beautiful but a talented and creative woman.

When the hit “Johnny” was released in 2014, the streets were bustling with the sound. Yemi says it was her biggest success. “My first proper attempt at Highlife was one of my biggest successes and it was about a true life story; a heartbreak I had experienced.” She said as she speaks on her hit single, “Johnny.” It took me from “zero to hero.”

She shared the highs and lows she has experienced with fame, what inspired her energetic performance, and her collaboration with international acts.

Yemi Alade was amongst the Nigerian artists that collaborated with Beyoncé and speaking about that experience, she reflected on the hurdles she had to go through during that period. According to her, it felt like her “village people were on her matter” as she woke up one morning and found that she had lost her voice, “I couldn’t speak or sing. So I did everything I could to make sure I was there, “she said. “I told myself, I’m here now and I must leave a mark. When they speak of me, they know that I put in my best.“

Speaking on the mental implications that came with fame, she revealed that after “Johnny” was leaked and people started paying attention to her, she started losing people. “I lost a lot of friends and support. I lost my freedom to walk around… to be an ordinary girl,” she said. “When this blinding effect of success started to happen, they wouldn’t show up anymore.” Yemi Alade spoke about her bosom friend that became distant and one could see through the camera that the loss of that friendship was quite painful to her.

When she began her career, she didn’t want to be defined by a genre. So, she practised with all kinds of genres and eventually settled for Highlife. “After winning the talent show, I was trying to discover what kind of artist I would be eventually. I didn’t want to be put in. a book, so I would try out every genre and settle with the ones I got familiar with. I always thought I would be a soul singer…”

Continue Reading
You may also like...
Related Topics:Featured, Yemi Alade