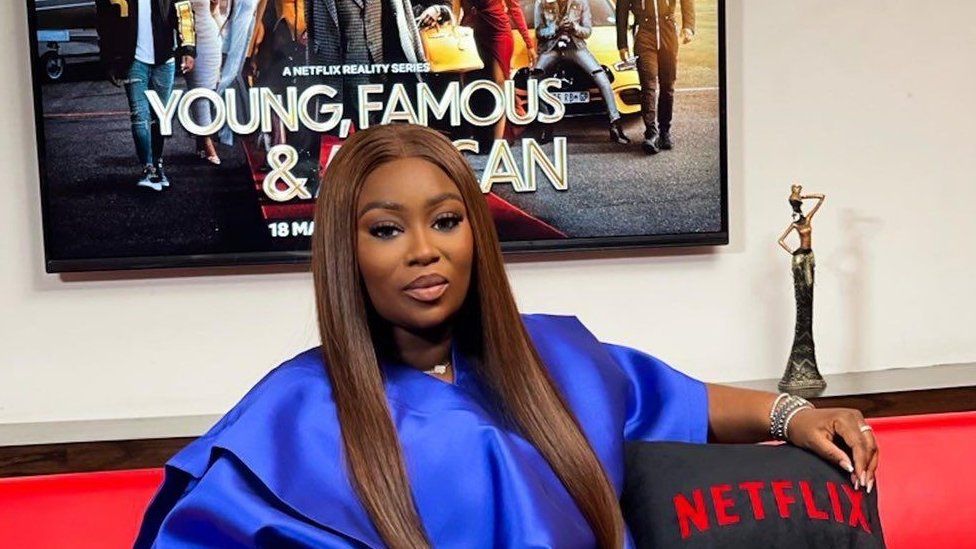 From multi-coloured lace front wigs, to the licking of a bald man’s head, to catty fights, it is no surprise Netflix’s first African reality TV series was a hit with fans.

Peace Hyde, the British-Ghanaian creator behind the show, spoke to the BBC’s Cecilia Macaulay about her previous life as a teacher, struggles as a single woman working in African media and defended Young, Famous & African as an authentic and vital piece of content for the continent today.

Set in what the cast describes as the richest square mile in Africa, Young Famous & African subverts the media stereotype of the continent. Featuring private jets, shiny luxury cars and elaborate costumes, the seven-part series is opulent viewing.

Based in Sandton, Johannesburg, it features 10 wealthy African celebrities mostly from South Africa and Nigeria, but also from Uganda and Tanzania. The cast includes some household names like musicians 2Baba, previously known as 2face, and Diamond Platnumz.

But the woman who created this world of wealth and glamour for Netflix has not always known that lifestyle herself. Now dubbed an African media mogul, Peace Hyde started off her career in a different field. She used to work for a British children’s charity, looking at substance abuse.

“It was too intense. I was not emotionally able to do that,” she said, while sitting opposite me in a flowy black outfit, with shiny bone straight hair, a perfectly matte face of make-up and long nude-coloured manicured nails.

Hyde then decided to teach science to teenagers in a London school. Although she enjoyed it, she felt unfulfilled after pupils told her she was too good to stay in the classroom. She remembers the moment distinctly.

“I was teaching them digestion and I took a Big Mac burger and I put it through tights to show them,” she burst into a full, hearty laugh at the memory.

Despite being “very strict”, her pupils really liked her, she recalled.

“One of them was like: ‘You know, Miss we think you’re really cool, but don’t you think you should do more?'”

That comment hit home. She spent her working days telling her students to achieve their dreams, but she was not doing the same thing herself.

“It resonated on another level,” she said.

Hyde decided to move to Ghana, where her parents came from, and pursued a career as an actress, but soon discovered she had no talent for it whatsoever. She cringes at the prospect of having to discuss it, gasping and whispering under her breath: “Let’s not do that part.”

“It was dreadful,” she exclaimed. “I was Peace with bad wig and bad make-up,” she joked.

She soon discovered that her true talents lay behind the cameras, and focused her energy on writing and producing content as a journalist for Forbes Africa. It was after an interview with an African businessperson that she first got the idea to create Young, Famous & African.

Not long after, Hyde and her co-creator Martin Asare-Amankwa were in touch with big networks, including in the US. They loved the idea, but wanted to skew the show in a direction Hyde was unhappy with.

“We found that a lot of people have a pre-conceived notion of Africa,” she said, with some networks asking her to bring some “Black is King energy” to the show – referring to Beyoncé’s visual album of the same name which features elements of African culture. It came in for criticism, with some saying it was cultural appropriation, although this was denied by Beyoncé’s supporters.

Hyde looks visibly unimpressed by the “Black is King energy” memory and humorously acts out a famous booty dance popularised by the American singer.

Netflix was the network that was willing to keep the show – then just an idea in Hyde’s head – authentically African and unscripted, she said.

‘A celebration of Africa’

But not everyone buys the idea that the series is representative of African celebrity culture.

“The only person I knew there when I started watching it was Diamond Platnumz, Swanky and Annie. After those three, the rest I had no idea who they were,” said 21-year-old Nigerian student and TV critic Shola-Adido Oladotun.

He also questioned why the cast were from such a small selection of African countries: “Most of the cast members are from South Africa and Nigeria, OK, what’s new about that? – But I would really love to learn about more African cultures.”

Hyde insists the show’s line-up were “superstars”, including the likes of South African and Nigerian actresses Khanyi Mbau and Annie Macaulay-Idibia, as well as entrepreneur Zari Hassan and others.

Another of those cast members is multi-award winning Nigerian celebrity stylist, Swanky Jerry. He has known Hyde as a friend and mentor for around seven years.

“When I was leaving for South Africa, I called her,” he recalled.

He told her he was on his way to film Young, Famous & African and that it was “confidential”, but he wanted her advice. She told him to “kill it” and do his thing.

Little did Swanky know Hyde was the woman behind the whole series. When he filmed one of his first scenes he saw her on set.

“It’s a dark room,” he said, describing the noise and cheering in the studio when he introduced himself on camera. Then he noticed Peace.

“Did I just hear Peace’s voice in this room?!” he remembers thinking. He says he was shocked: “Are you kidding me, how can you be here?! I was blown away”.

She prefers to be behind the scenes, but is still an underground “power player”, he said.

“I don’t have the rivalry of Ghana versus Naija [Nigeria] or Kenya versus Uganda,” she said. “That’s why the show is Young, Famous & African – because it’s a celebration of Africa to the world,” she continued.

In what many have called a refreshing take on the continent, which bypasses stories of corruption and insecurity, Hyde says her niche in the media industry is not to create content that focuses on the problems Africans face in their daily lives. Instead, she wants to entertain and inspire young people on the continent.

“I feel that we all have a voice and while there are some that are holding politicians accountable there are also some that are inspiring the next generation of Africans to show what real honest hard work can produce,” she said.

However Hyde’s path to making Netflix history as the creator of its first African reality TV series, and working as a senior media executive at Forbes Africa was not always easy. She faced a few cultural shocks when she moved from the UK to Ghana.

“I think the biggest difficulty for me was just understanding that I have very lofty ambitions, and it’s not always well-received,” she said, referring to people who question how she could become a wife and a mother with such big career goals.

Hyde said she understands where those who question her are coming from, but it has still been a struggle: “There’s been a lot of challenges in terms of the mindset and in terms of being able to go into certain rooms, and opportunities as a single woman… It’s been an uphill climb.”